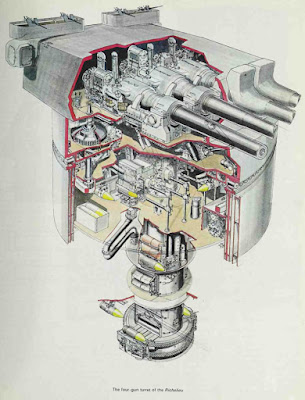 The Richelieu was a French battleship launched in 1939; this one and her twin Jean Bart were built as a response to the Italian Littorio class and conceived …

The 380/45 Model 1935 gun was the most powerful ever mounted in a French battleship. It was a built-up gun similar in construction to the 330/52 fitted in Dunkerque and Strasbourg. Published drawings show an A tube and loose liner inside a double row of overlapping hoops at the breech end.6 Later guns had fewer components (see schematic drawing and caption). The configuration and operation of the Welin interrupted screw breech block were essentially unchanged from the 330/52.
The 380mm Mle 1936 APC7 shell weighed 884kg and had an initial velocity of 830m/s. The ballistic cap housed a dye bag which served to colour the shell splashes in order to facilitate spotting when operating in company with other ships; a small burster and nose fuze ensured dispersion.8 The shells supplied to Richelieu contained a yellow dye; Jean Bart was assigned orange.

The quadruple turret was designed by Saint Chamond and was a development of the earlier 330mm model, the principal difference being that conical rollers were used in place of ball bearings for training. Like the 330mm turret, it was divided into two separate gunhouses by a central bulkhead, which in the Richelieu class was increased to 45mm thickness. The guns were in pairs, and although each gun was in a separate cradle the relative movement of the guns in each pair was again limited.

The guns could be loaded at any angle, and the maximum angle of elevation was 35 degrees, at which the 380mm Mle 1935 had a theoretical range of 41,500 metres. Training and elevation were powered by Léonard circuit electric motors with hydraulic drive, each pair of guns having a single elevating motor with individual drive gear. RPC was to have been fitted for both training and elevation; however, the failure of the Sautter-Harlé-Blondel system fitted in Dunkerque and Strasbourg resulted in a loss of confidence in the application of this technology to heavy armoured turrets, and it was never fitted.

The magazine layout and the loading/replenishment arrangements were modelled on those of the 330mm turrets. A total of 832 AP shells were provided – slightly fewer than in Dunkerque and Strasbourg (896 rounds). As with the 330/52 gun, the propellant charges were in quarters, which for a gun of this calibre made them unusually heavy. The overall replenishment cycle proved slower than anticipated, and during gunnery trials in spring 1940 the big guns achieved a rate of fire of only 1.3 rounds per minute.

French gun construction
The construction of the French 330/52 and 380/45 guns was a mixture of modern and traditional methods. The guns were of built-up construction, with complicated assembly and many more component parts than contemporary British and US major-calibre guns. They were built by the Fonderies de Ruelle, the establishment near Angoulême responsible for the design and construction of all French naval guns and shells.

Early French naval guns dating from before the Great War were built up using large numbers of ringshaped hoops for strength to compensate for the inferior steels available – the special (HLE) steels had elasticity values of only 35-45 per cent, well below those available to the other major navies, which meant that the gun could withstand a maximum internal pressure of only 2700kg/cm2.

It was a French engineer, Malaval, who in 1912 proposed auto-fretting as a means of increasing the strength of the barrel while reducing the number of component parts. During the assembly process the hoops were heated to high temperatures, slipped over the gun tube and allowed to cool. As they cooled they contracted, until at the end of the process they were squeezing the gun tube inside with a pressure of many thousands of kilos per square centimetre. By using this ‘pre-stressing’ technique it was possible to make a gun barrel more resistant to internal pressure. An experimental 100mm gun built using these techniques was found to be able to sustain an internal pressure of 5000kg/cm2.

All French naval guns built from 1922 were autofretted, and improvements in the quality of French high-tensile steels (to 60-70 per cent elasticity) made possible further reductions in the number of components.

A document recently discovered at the Archives de l’Armement at Châtellerault makes it clear that there were two variants of the 380/45 gun:

– a Mle 1935 C/35 with 31 components: an A tube, a breech bush, twenty hoops, a breech ring, four tubes to the muzzle ending in the muzzle bush, and a locking ring. The ‘stepped’ loose liner with the rifling was held in place by a ring screwed into the breech end of the A tube.

– a Mle 1936 C/35 with only 20 components: the number of hoops was reduced from twenty to ten and the number of tubes to the muzzle from four to three.

The Welin ‘interrupted screw’ breech block opened upwards automatically when the gun ran out. It was hydro-pneumatically powered and was balanced by counterweights. Opening and closing times are given as 3.5 seconds. An automatic lock with a magazine for ten electric tubes was fitted.

The propellant charges were in quarters, and both the dredger hoist cages and the upper cage hoists had three compartments, each of the upper two housing a pair of charges with the Mle 1936 shell in the lower compartment. The guide rails for the upper cage hoists had a distinctive curved profile to enable loading to take place at any angle of elevation, the electric chain rammers being carried on an extension from each of the gun cradles. (In practice, the guns were generally reloaded at 15 degrees elevation to avoid the shell becoming jammed in the breech when the other guns were fired.)

Maximum elevation for the gun was 35 degrees. A spanning tray to protect the screw threads of the breech cavity ran in and out automatically, and the complete ramming time was 13.5 seconds.

The magazines and shells rooms for each pair of guns were on the same deck at opposite sides of the barbette, with those for the left-sided pair on the reinforced (30mm) inner bottom and for the right-sided pair on the deck directly above. Ammunition was fed by a shell and cartridge ring to a dredger hoist, one for each pair of guns. The hoist serving the lower level had two extra cages to compensate for the longer transit time.

When the dredger hoist cage arrived at the working chamber the shells and charges were transferred laterally to waiting positions directly beneath the guns, and were then transferred using rammers to the corresponding gun loading cage of the upper hoists, of which there was one serving each gun.
at October 21, 2018