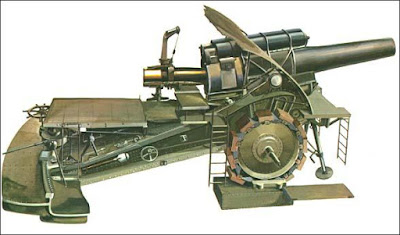 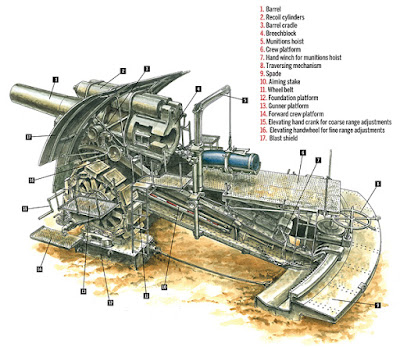 Austria and Germany were particularly prolific in manufacturing such massive weapons. Owing to the design and production capabilities of the Krupp facilities, Germany produced the most famous heavy weapons of the war. During the 1890s, Krupp began a program to produce a heavy howitzer capable of destroying the massive concrete fortifications then being constructed in Belgium and France. “Alpha,” the first of a series of prototypes, was a 204mm weapon; it was followed in 1900 by the 305mm “Beta.” Completed in 1911, the 420mm “Gamma” H was the culmination of the firm’s program; weighing 175 tons, it required dismantling for transport on ten railroad cars and fired a 2,535-pound shell up to 8.8 miles. By 1914 the Gamma series had evolved into the more mobile Gamma M, also known as the “Big Bertha” gun.

Popularly named after Alfred Krupp’s daughter, the 41.3-ton, 420mm “Big Bertha” had a horizontal sliding block and fired a 1,719-pound shell up to 10,253 yards. Big Bertha required five tractors to transport its components, and it had to be assembled on site. In conjunction with a number of Austrian Skoda 305mm howitzers, the L/14 was first used with devastating effect against Liège in August 1914; it saw other action on both the Western and Eastern fronts. Owing to its relatively short range and vulnerability to Allied fire, Big Bertha was obsolete by 1917. Another heavy piece, the 211mm Mörser was adopted in 1916. It weighed 14,727 pounds and fired a 250-pound shell up to 12,139 yards.