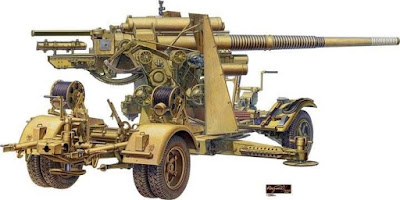 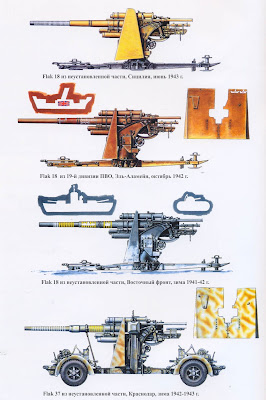 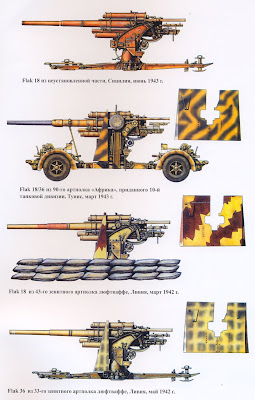 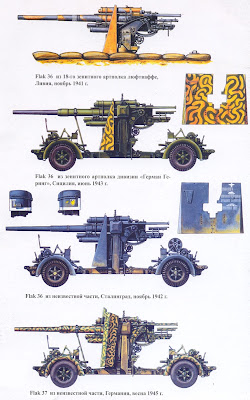 Although initially hampered by the restrictions imposed by the Versailles Treaty, Germany rapidly developed a system of highly effective antiaircraft weapons. An early attempt, adopted in 1928, the 75mm FlaK38 fired a 14-pound shell to a maximum ceiling of 37,730 feet. In the decade following World War I, Krupp arranged with the Swedish arms giant Bofors to allow its engineers to work secretly on new designs in Sweden. One of the most successful artillery pieces of all time came about as a result of that arrangement-the famous German Eighty-Eight. Originally designed as an antiaircraft gun, combat experiences in the Spanish Civil War and early World War II proved the Eighty-Eight's versatility in other applications. By war's end, German designers had also adapted it to antitank, tank, and conventional field applications. The first test model was assembled in 1931, and after trials the new gun went into ser- vice in 1933 as the caliber 88mm FlaK18. With a veteran crew it achieved a firing rate of 15 rounds per minute. The FlaK18 fired a 21-pound shell to a maximum ceiling of 26,247 feet, and in a ground role it achieved a range of 9.2 miles.

Krupp engineers continued to improve the FlaK18 and also redesigned it to ease its manufacture. The redesigned Eighty-Eight entered service in 1937 as the Flak36 and saw considerable service with Germany's Condor Legion in the Spanish Civil War. Having proved the gun's effectiveness as a ground weapon in Spain, Krupp again improved the Eighty-Eight, by adding ground sights and pro- viding high-explosive shells for field use. Firing high-explosive and armor-piercing ammunition, the Eighty-Eight further proved itself against British armor in North Africa in 1941-1942. As the war progressed, it became increasingly necessary to increase German tank armament to match the heavy guns and armor of the new Soviet tanks on the Eastern Front. That necessity resulted in slight modifications to the basic Eighty-Eight design, which resulted in the Kwk36 (Kampfwagen Kanone) and the Kwk43, for use in Tiger tanks and self-propelled guns.

The appearance of Luftwaffe anti-aircraft units on the battlefields of Europe and Africa in a conventional artillery role was not due to any personal ambition of the Reichsmarschall, but rather to a sound and admirable flexibility of thought on the part of the German staff. So often ignorantly criticized for rigidness, the Germans, in their willingness to experiment with combat techniques, compare very favourably with certain episodes in the record of the Allied command.

The superb 8·8 cm anti-aircraft gun developed by Krupps in the early 1930s first appeared at the front line in Spain during 1936, equipping Flak batteries of the German expeditionary force. (It was entirely logical that anti-aircraft artillery should fall under Luftwaffe control, not least because of the importance of close technical liaison.) 'Flak' has come into common English usage, and will be used throughout this text; it is a contraction of Flieger-Abwehr-Kanone, 'anti-aircraft cannon'. The version used in Spain, properly termed the 8·8 cm Flak 18, was followed in 1937 by the improved Flak 36 model, which had provision for the speedy changing of barrels, and a new and significant wheeled carriage designated Sonderanhänger 201. The normal ground mounting was of cruciform design; for travelling the side arms were folded upwards and wheeled bogies fitted to the long arms. The 201 mounting allowed the gun to fire on ground targets without being freed from the bogies and winched down to ground level; the brakes were applied, the wheels chocked, the side arms of the cruciform mounting folded down and the 'feet' at their extremities winched down to brace against the ground - and the gun was ready for action. It is not known who first suggested that the gun was too versatile to be confined to flying targets, but he was certainly a soldier of some vision; that battlefield use of the gun played a part in staff thinking from an early stage is confirmed by the fact that from 1940 onwards armoured shields to protect the crew during ground combat were fitted to new guns, and fitted retrospectively to many Flak 18s.

The Luftwaffe Flak regiments and batteries operated in great numbers throughout the war, and with enormous success. To detail all these units is frankly beyond the author's competence and would serve little purpose; but perhaps it is valid to consider one isolated campaign - that in North Africa.
In the mobile desert warfare of which the Germans of Rommel's Panzerarmee soon showed themselves to be masters, the Flak played a vital part. Supply and replacement problems haunted Rommel almost from the first - his uniquely vulnerable lines of communication lay across a Mediterranean ranged by Allied aircraft from Malta and submarines from Malta and Gibraltar - and although his precious tanks were superior in quality to all Allied equipment until the very end of the campaign, their numbers were never as high as he could have wished. To conserve the PzKpfw IIIs and IVs of 15th and 21st Panzer Divisions, he evolved a deadly technique.

It has been said that despite the glamorous image of the tank columns which churned across the Western Desert, the real kings of the African battlefields were the landmine and the anti-tank gun. The greatest of these was the 'eighty-eight'; it was extremely mobile and could operate well forward with the advanced armoured squadrons. It was normally towed by the heavy SdKfz 7 half- track; this powerful vehicle could accommodate the entire crew of eleven (layer, trainer, breech-worker, fuse-setter, five ammunition numbers, commander and driver) and their personal equipment, a good supply of ammunition for immediate use, and reserves of fuel. Thus, once a target was sighted, the gun could be got into action very quickly. Its impressive rate of fire - between fifteen and twenty rounds a minute - was combined with great range and accuracy. Maximum low-trajectory range was 16,500 yards, and the 21-lb armour-piercing round could kill a tank at up to 3,000 yards - three times the range of the best Allied equipment. Its air-burst high-explosive round was notably effective against infantry. In the 'eighty-eight', Rommel had a deadly anti- tank weapon, a fine anti-aircraft gun, and a field-piece capable of augmenting conventional barrages with great speed and accuracy, all rolled into one supremely functional piece of metal.

The most frightening and effective use of the gun was in Rommel's famous 'Flak front'. In the face of advancing enemy armour the Luftwaffe regiments would be sent right forward and dug in to ground level; the gun was easy to conceal, as is any relatively small piece of equipment at ground level under the peculiar light conditions of the desert, and its rounds used a flashless propellant. A few troops of tanks would probe forward, making contact with the British armour and then withdrawing, luring the Grants and Crusaders within range of the trap. Once they were comfortably lined up the Flak would methodically decimate them; their own short-range guns were useless, their attackers were virtually invisible, and their casualties were frequently appalling. At its anti-tank debut in the Battle of Sollum in June 1941 the 'eighty-eight' is claimed to have destroyed 123 out of 238 British tanks attacking the Afrika Korps position in Halfaya ('Hellfire') Pass); according to German sources this represented one 'brewed' tank for every twenty rounds fired by the Flak batteries.

Another battle in which the 'eighty-eights' distinguished themselves and their Luftwaffe crews was the series of actions near Agedabia in January 1942. Prominent was a crack Air Force unit, Major Hecht's Flak Regiment 135; the 18th, 33rd and 35th Regiments also did well, as did Major Hartmann's Reserve Flak Abteilung 114. The 135th, now led by Oberst Wolz, also figures honourably in the records of Bir Hakeim in June 1942; in this hard-fought action he also had under command various detached battalions, notably II./Flak 25, I./Flak 18, I. /Flak 6 and I./Flak 43· The last-named unit won no fewer than three awards of the Ritterkreuz (Knight's Cross) during the desert fighting; they were awarded to Oberleutnant Gellert, Major Gürcke (the commanding officer) and Oberfeldwebel BöseL. At El Alamein the 102nd and 135th Regiments were organized as the main fighting units of the '9th Flak Division, under direct army command and led by Generalleutnant Burckhardt; these units, together with the 109th Flak Battalion attached to Graf von Sponeck's famous 90th Light Division, and various army Flak battalions, had a total strength of eighty-six 8·8 cm guns at the opening of the battle. So seriously did the British take these weapons that Montgomery issued explicit instructions to his armoured brigade commanders concerning the absolute necessity of avoiding the 'Flak front' and saving their strength for the final battle with the panzers. Even so, it is said that the 'eighty-eights' were largely responsible for the massacre of the first wave of British armour at Alamein.

The Flak fought their way back along the coast with the other survivors of the Panzerarmee, and were still scourging Allied armour as the last stores were burned in Tunis in May '943. The remains of the '9th Flak Division took up their last firing positions along the Miliane line, in company with the survivors of the' Hermann Goring' Division and Koch's and Ramcke's paratroopers. The 20th Flak Division, or what was left of it, was at Tebourba; the 3/52 Battery distinguished itself in the last few days of the fighting when Leutnant Happach and Oberfeldwebel Wilhelm Voight turned their 'eighty-eights' on the American 2nd Armoured Battalion, and killed twenty tanks in as many minutes.
at October 19, 2018