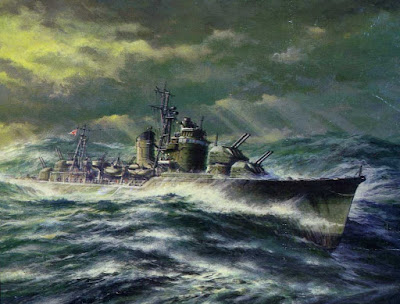 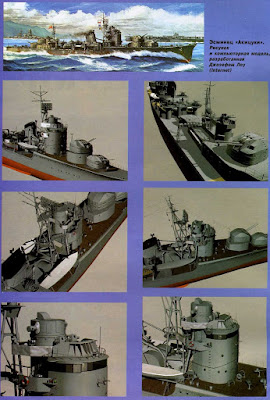 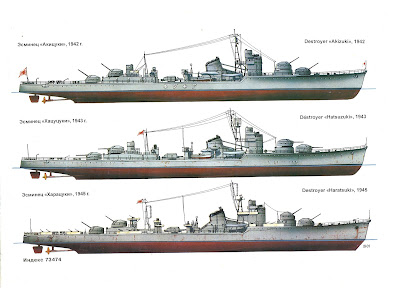 In 1942, Shimakaze was launched as an experimental one-ship class looking forward to the construction of larger destroyers. The experience gleaned from Shimakaze led to the launch of 12 ships of the Akitsuki class that were designed primarily as fast AA defense escorts for aircraft carriers. These were among the last fleet destroyers built for the Imperial Japanese Navy. The hull of Akitsuki measured 440 feet, 3 inches by 38 feet, 1 inch by 13 feet, 7 inches, displaced 2,701 tons, and possessed turbines that generated a maximum speed of 33 knots. Its armament consisted of eight 3.9-inch guns in dual mounts that were fully enclosed by gun houses. Two each were sited in the bow and stern. These guns, like previous Japanese destroyers, were dual-purpose weapons capable of firing on surface targets and aircraft. The vessel also carried four 24-inch torpedo tubes, four 25mm AA weapons, and 72 depth charges.

Most Japanese destroyers were refitted with additional antiaircraft guns to the extent that one of the gun houses and its armament were removed to allow the necessary space. In some cases, so many AA weapons were carried that the stability of the ship was undermined. Japanese destroyers were also retrofitted with radar sets, but these were inferior to the equipment of the Allies.


By far the largest destroyers built in series by the Japanese, the 'Akitzuki' class ships were conceived originally as AA escorts comparable with the British 'Dido' and US Atlanta' cruiser classes and, by comparison, offered a cheaper solution to the problem. The choice of a 100-mm (3.94-in) gun was probably better than that of the 133.4- mm (5.25-in) and 127-mm (5-in) weapons of the Western ships, whose rate of fire was considerably lower, though the lively hull of a destroyer must have made them less effective than cruisers when firing at aircraft. They were the only eight-gun destroyers in the Japanese fleet, and it would seem that the quadruple torpedo tube mounting was something of a late addition. Though they had the basis of an effective design, the Japanese too had underestimated the devastating effect of a determined air attack and only four light automatic guns of the standard 25-mm calibre were originally shipped. War experience encouraged the addition of more at virtually any opportunity, so that, by the end of the war, those still afloat (six were sunk) could dispose of up to 50 such weapons, Launched between 1941 and 1944, the ships of the class were the Akitsuki, Fuyutsuki, Hanatsuki, Harutsuki, Hatsutsuki, Natsusuki, Niitsuki, Shimotsuki, Suzutsuki, Terutsuki, Wakatsuki and Yoitsuki.

The most distinctive feature of the class was the complex casing of the single stack; extensive trunking enabled the funnel to be sited far enough abaft the bridge both to cut the smoke problem and greatly improve visibility, while placing it sufficiently far forward to permit extra AA platforms to be installed where the after stack would normally have been. To increase its effectiveness, the new design was given a second fire- control position aft. A feature of preceding classes had been their extremely light masts, but the 'Akitzukis' were among the first to have their masts strengthened for the support of the considerable bulk of the Type 22 surveillance radar antenna. The size of the hull, combined with a comparatively light gun armament and few torpedoes, allowed more generous top weight margins than was customary with Japanese destroyers, one result being a large depth-charge capacity. Nearly 40 more hulls to two improved designs were planned but never completed.

The lead ship, Akitzuki, was started in July 1940 and completed m June 1942, but the last of the class was not completed until April 1945 (Hatsutsuki). The Hatsuki, Kiyotsuki and Ootsuki were never laid down and the Michitsuki was stopped in March 1945 and broken up to make way for suicide craft. Six were sunk in action or torpedoed, and the other six were surrendered, two of them badly damaged. The Fuyutsuki was taken over by the US Navy in 1947 and scrapped, the Harutsuki became the Soviet Pospechny, the Hatsutsuki went to Britain and the Yoitsuki became the Chinese Fen Yang.
at October 21, 2018