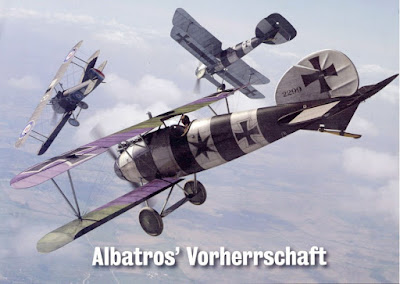 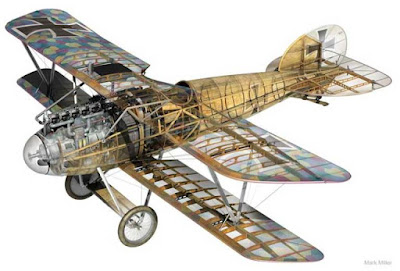 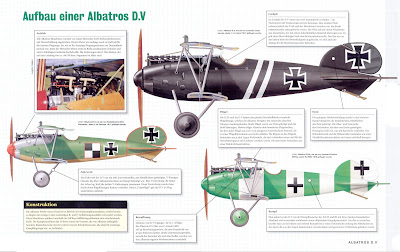 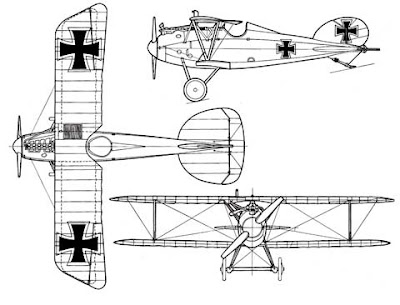 Albatros DVa
The famous Albatros scouts were among the most beautiful and deadly fighters of World War I. By the spring of 1917 they had become so indelibly associated with fighting that the British christened this period “Bloody April.”

The famous Fokker scourge of 1915 was summarily ended by the appearance of the Nieuport 11 and the de Havilland DH 2, and the Germans were hard-pressed to field an effective foil. In the spring of 1916 the Albatros Werke under chief engineer Robert Thelen conceived a fighter design unlike anything that had been seen in the skies of Western Europe. Dubbed the D I, it was extremely sleek and heavily armed, being the first German biplane fighter powerful enough to carry two synchronized machine guns. It debuted with great success that spring before a subsequent version, the infamous D III, appeared. This machine proved even deadlier. The D III combined many aeronautical refinements and incorporated features of the heretofore unbeatable Nieuport 17, including vee struts and a smaller lower wing. In the hands of aces like von Richthofen, Boelcke, and Voss, it quickly established superiority over opposing Allied aircraft. Consequently, the spring of 1917 became reviled as “Bloody April,” and the prowess of Albatros scouts caused the life expectancy of British airmen to be measured in days.

One persistent problem with the D III, which it had ironically inherited from Nieuport fighters, was the inherent weakness of the lower wing. In combat it was liable to flutter and break off, with fatal consequences. An improved model, the D V, was accordingly introduced in May 1917 to correct this.

It featured a deeper, elliptical fuselage, a more powerful engine, and more closely spaced wings. However, despite these refinements, the D V and its successor, the D Va, boasted few advantages over the aging D III. Throughout most of 1918, the D Vs constituted the bulk of German fighter strength, although they continually lost ground to newer Allied types such as the SPAD XIII and Sopwith Camel. An estimated 3,000 Albatroses, including Austrian versions, were manufactured.

The D.V entered service in May 1917 and, like the D.III before it, immediately began experiencing structural failures of the lower wing. Indeed, anecdotal evidence suggests that the D.V was even more prone to wing failures than the D.III. The outboard sections of the upper wing also suffered failures, requiring additional wire bracing. Furthermore, the D.V offered very little improvement in performance. This caused considerable dismay among frontline pilots, many of whom preferred the older D.III. Manfred von Richthofen was particularly critical of the new aircraft. In a July 1917 letter, he described the D.V as "so obsolete and so ridiculously inferior to the English that one can't do anything with this aircraft." British tests of a captured D.V revealed that the aircraft was slow to maneuver, heavy on the controls, and tiring to fly.

Albatros responded with the D.Va, which featured stronger wing spars, heavier wing ribs, and a reinforced fuselage. The D.Va also reverted to the D.III's aileron cable linkage, running outwards through the lower wing, then upwards to the ailerons, to provide a more positive control response.

The wings of the D.III and D.Va were in fact interchangeable. The D.Va was also fitted with a small diagonal brace connecting the lower section of the forward interplane strut to the leading edge of the lower wing. These modifications made the D.Va 23 kg (50 lb) heavier than the D.III, while failing to entirely cure the structural problems of the type. Use of the high-compression 130 kW (180 hp) Mercedes D.IIIaü engine offset the increased weight of the D.Va.

Deliveries of the D.Va commenced in October 1917. The structural problems of the Fokker Dr.I and the mediocre performance of the Pfalz D.III left the Luftstreitkräfte with no viable alternative to the D.Va until the Fokker D.VII entered service in the summer of 1918. Production ceased in April 1918.

As of May 1918, 131 D.V and 928 D.Va aircraft were in service on the Western Front. This number declined as the Albatros was replaced by Fokker D.VIIs and other types during the final months of the war, but the D.Va remained in use until the Armistice (11 November 1918).