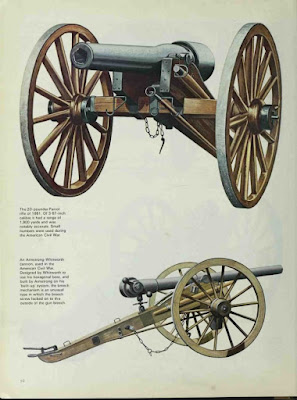 The Parrott Field Rifle
Between 1856 and 1859, Robert Parker Parrott and Dr. John Braham Read collaborated in developing what was to become the most used rifled field gun by either side during the Civil War. In 1849, Parrott, the superintendent of the West Point Iron and Cannon Foundry of Cold Spring, New York, became interested in rifled guns after the successes of Krupp in Germany. In the following years he applied his own skills to designing an American rifled gun and eventually joined with the Alabamian Read, who had an interest in designing the appropriate projectiles. Their joint venture proved successful, with both men receiving various federal patents; yet, with secession, Read sided with his native state and returned home. Parrott continued to manufacture his rifles and their ammunition in various calibers throughout the war, whereas Read aided the Southern cause by designing projectiles.

Parrott's design incorporated a cast iron gun tube strengthened at the breech by a broad wrought iron reinforcing band. During the manufacturing process the tube was cooled with water as the band was heated and then heat shrunk to the barrel as it expanded. The final result produced a relatively lightweight, economical gun and gave the Parrott rifle its distinctive profile. The Parrott rifle was not, however, without its defects. Although immensely strong at its breech, the brittle cast iron forward of its reinforcing band was prone to burst, especially in larger caliber pieces. Nevertheless, its low cost and ease of manufacture dictated its land and naval use throughout the war, with almost 2,000 guns accepted by the federal government, as well as numerous pieces manufactured by Confederate foundries.

The first of the Parrott field rifles, the 2.9-inch Army Pattern of 1861 10-pounder, was eventually superseded by the 3-inch Pattern of 1863, which appeared in the latter part of that year and was cast without the earlier pattern's muzzle swell. The primary impetus for the change in caliber was to allow more interchangeability in ammunition between Parrotts and other rifled guns then in service. Although the Pattern of 1863 was capable of firing Pattern of 1861 ammunition, the reverse was not possible-a drawback apparently considered acceptable under the circumstances. The highly accurate 3-inch Parrott achieved a range of about 1,900 yards. The federal government purchased more than 500 Parrott 10-pounders during the war, with others going to various state units.

Confederate foundries including Tredegar also manufactured both 2.9-inch and 3-inch Parrott rifles. Southern Parrotts were somewhat longer and heavier than Northern guns and were also distinguished by a longer reinforcing band, often beveled on its leading edge.

As with the 10-pounder guns, early 3.67-inch, 20-pounder Parrotts were cast with a muzzle swell, that feature being omitted on later pieces. With a range of 1,900 yards, they were mounted on the #3 stock trail carriage. Federal purchases for both the army and navy totaled 507 pieces. Confederate 20-pounders were essentially identical to the Northern models, other than their longer and heavier band giving a somewhat greater total weight.

FOREIGN ARTILLERY USED IN THE AMERICAN CIVIL WAR
At the beginning of the Civil War, neither the Northern nor Southern logistics and ordnance organizations were prepared to supply and arm the vast influx of volunteers swelling their armies' ranks. To gain time, both sides dispatched agents to Europe to buy foreign military goods, including uniforms, accoutrements, small arms, and artillery. For their part, European arsenal commanders were more than happy to clear out stocks of obsolete and often defective equipment in exchange for U. S. gold, bonds, or cotton. Of all the foreign weapons used by either side, those obtained from Britain proved the most effective.

During the early months of the war the most famous of the Confederate agents, Major Caleb Huse, scoured Europe signing contracts for weapons ranging from pistols to cannons. Such weapons were usually sufficient until more modern weapons could be procured but often required some improvisation to use U. S. ammunition. One such example-the approximately 17 Austrian bronze 6- pounders obtained by Huse-were bored to 3.74 inches rather than the American 3.67 caliber. Although a seemingly minor detail, such disparities required extra effort on the part of ordnance crews, who had to wrap ammunition for the Austrian pieces in an extra layer of canvas for a proper bore fit.

The son of a Congregational minister, Sir Joseph Whitworth (1803-1887) was one of Britain's leading engineers and helped to revolutionize the country's precision tool making industry. He designed machine equipment and a highly accurate rifle, as well as advanced cannons. Whitworth designed various calibers of both muzzle- and breech loading artillery pieces, with both types sharing his unique rifling system. The bores of Whitworth cannons and small arms were precisely cut with distinctive spiraling hexagonal rifling that required a matching six-sided projectile. The odd shape of the projectile produced a weird, unnerving shriek as it traveled through the air.

Although rejected by the British army in favor of Armstrong weapons, Whitworth rifles were made of high-grade steel and iron and were capable of extremely accurate long-range fire of nearly six miles. Still, such accuracy was often negated by the period's lack of sophisticated sights, fouling problems, and the complicated loading procedure that often baffled poorly trained crews: in many cases Confederate gunners locked the breechloaders' mechanisms and simply used them as muzzleloaders. Moreover, the slender Whitworth projectile was too small to carry a significant bursting charge. Solid bolts did, however, prove highly effective against armored targets, owing to their high velocity at flat trajectories.

The breechloading 2.75-inch 12-pounder was the most commonly used Whitworth by both sides during the American Civil War. Other lesser used models included the 2.15-inch and 3.75-inch breechloaders, as well as the muzzleloading 5-inch 80-pounder seacoast rifle. With a 10-pound charge and an 80-pound projectile filled with a 3.17-pound bursting charge, the seacoast Whitworth had an astounding 13,665-yard range at 10-degree elevation. Although an impressive weapon, such large rifles were prone to fouling, and inexperienced crews often found loading difficult and at times dangerous: improperly handled shells were prone to detonate prematurely.

The Confederacy imported a small number of both muzzle- and breechloading British Armstrong rifles of various sizes during the Civil War. The most popular Armstrong for field use, the 3-inch model, fired a 12-pound projectile 2,200 yards. The 70-pounder 6.4- inch breechloading Armstrong fired a 79.8-pound projectile loaded with a 5.4-pound bursting charge 2,183 yards. Two large 8.5-inch (150-pounder) 120-inch-long muzzleloading Armstrongs were included in the defenses of Wilmington, North Carolina: a 15,737- pound cannon at Fort Fisher and a 15,786-pound gun at Fort Caswell. The 150-pounder required a 20-pound charge.

Although rejected by his own government, British captain Theophilus Alexander Blakely found the Confederacy a ready buyer of his muzzleloaded rifled cannons during the Civil War. Blakely contracted with various private firms to cast his heavy and field pieces under license. Most Blakely bores were cut with right-hand twist-the so-called saw tooth or hook-slant rifling-and were manufactured using a cast iron core reinforced at the breech with wrought iron bands. Sizes ranged from small 2.5-inch 6-pounders to 12.75-inch seacoast rifles. Several types of 3.5-inch 12-pounder Blakely field rifles saw Confederate service during the Civil War. Other less used types included the 3.75-inch 16-pounder and the 4.5-inch 20-pounder, classed as naval and siege weapons.

Larger Blakelys included 7-inch (120-pounder) navy rifles. The Confederate raiders CSS Alabama and CSS Florida each mounted a 7-inch Blakely on pivots. A number of Blakely 7.5-inch pieces were also made up from British 42-pounder smoothbores that were banded and rifled according to Blakely's patent. The barrels of the converted pieces utilized twelve-groove "hook-slant" rifling. On 22 May 1863 one such rifle-known as the Widow Blakely, as it was the only Blakely in the Vicksburg defenses-lost two feet of its muzzle when a shell exploded prematurely. Workmen repaired the remainder of the tube, and the Widow continued to defend the city until its fall on 4 July.

Other heavy pieces included 8.12-inch rifles made up from converted British 68-pounder smoothbores, 9-inch rifles, and 12.75- inch seacoast rifles. The 12.75-inch Blakely fired very heavy flanged projectiles, including 450-pound shells, to about 2,000 yards, and reportedly bolts as heavy as 700 pounds. Two 12.75-inch Blakelys were delivered through the blockade for the defense of Wilmington, North Carolina, in August 1863 but were rerouted to Charleston, South Carolina, by order of Secretary of War James Alexander Seddon and General Pierre Gustave Toutant Beauregard. Local gunners, however, were unfamiliar with the Blakelys' innovative air chamber. Some 7 inches in diameter and 30 inches long, the bronze air chamber was located at the breech below the guns' powder chamber and was intended to reduce the shock of the recoil. Baffled by the unexplained extra space, General Roswell Sabine Ripley ordered one of the guns' crews to load the air chamber with powder during its first firing, thus bursting the piece. When loaded correctly, however, the second gun functioned satisfactorily; after repairs, the damaged gun was returned to service.
at October 19, 2018