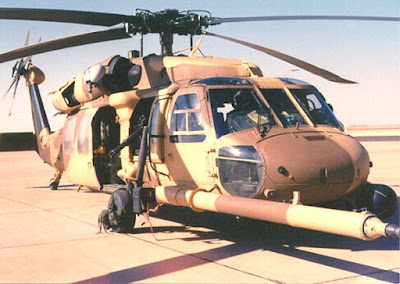 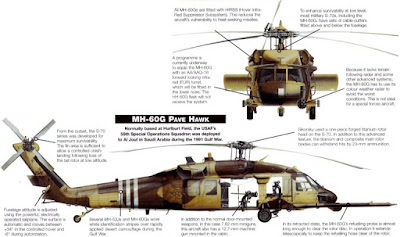 The increased speed, range, and carrying capacity of the Black Hawk meant that it quickly found a number of uses in the special operations community. The MH-60G Pave Hawk was designed to deliver and extract Special Forces behind enemy lines, while the similar HH-60G was developed as a combat rescue helicopter for the Air Force. Both types are equipped with weather radar to allow operations in poor weather, while pilots are equipped with night vision goggles (NVGs) that enable missions to be carried out in low visibility. Pave Hawks are equipped with retractable in-flight refueling probes and internal auxiliary fuel tanks for increased range. Both types have seen extensive combat since the end of the 1980s, flying missions in Operation Desert Storm, Operation Iraqi Freedom, and Operation Enduring Freedom in Afghanistan, as depicted here. 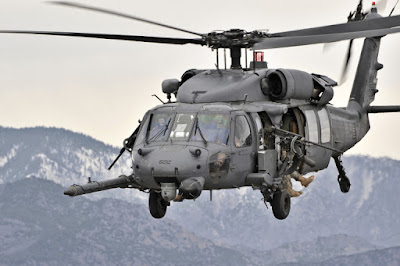 HH-60G PAVE HAWK
The Special Forces and rescue variants of the Black Hawk have now been in service for two decades. A number of current aircraft are finished in Gunship Gray (Federal Standard paint 36118) for low-visibility daylight operations against a ground threat, gray being much less obvious against the sky than standard green or camouflage colors. This aircraft is fitted with the External Stores Support System (ESSS). Developed in the 1980s to allow aircraft to be ferried over long distances, the ESSS consists of two downward-sloping stub wings with four hardpoints for external tanks. The extra fuel carried allows rescue helicopters to penetrate deep into enemy territory, where aerial refueling might be risky. In combat (and as shown here), only the outer tanks are fitted, allowing a clear field of fire for the door gunners.

Hawks Special Forces units have proliferated in most armies over the last 40 years, and helicopters are ideal platforms for delivering and supporting Special Forces teams. In the 1980s, the Army decided to convert 30 UH-60As to a special operations version, known as the MH-60A. This featured a number of modifications, some of which were later to be applied to other Black Hawk variants. The primary mission of the MH-60 is to conduct overt or covert infiltration, exfiltration, and resupply of Special Operations Forces across a wide range of environmental conditions.

To give the helicopter additional range, an in-flight refueling probe was fitted, and an additional 117-gallon internal fuel tank was mounted in the rear of the cabin. This gave the MH-60 an infiltration radius without air refueling of just under 340 miles. HIRSS exhaust shields were fitted to give protection against heat-seeking missiles, and other defensive countermeasures, including a disco light heat-seeking missile jammer and two M130 chaff/flare dispensers, were added.

To enable the aircraft to operate by night, a night vision goggle (NVG)compatible cockpit was fitted, and a FLIR video camera was mounted in a turret in the nose. Defensive capabilities were increased by adding a pintle-mounted minigun on each side in place of the M60D machine guns normally carried at the time.

Since many of its features were tacked on in an improvised fashion, the MH-60A was nicknamed the Velcro Hawk. These machines were replaced in regular Army service by UH-60Ls brought up to a similar MH-60L Velcro Hawk configuration. The older MH-60As were handed down to Army National Guard units.

As with most variants of the UH-60A and UH-60L, the MH-60s could be fitted with either the ETS or ESSS stub wings, and they have carried a variety of stores and armaments, including a 30mm chain gun and unguided rocket pods. Developed for the US Army's 160th Special Operations Aviation Regiment at Fort Campbell, Kentucky, armed MH-60Ls entered service in 1990. Designated as the MH-60L Direct Action Penetrator or Defensive Armed Penetrator (DAP), the armed MH-60 has the primary mission of armed escort and fire support.

MH-60G Pave Hawk
The Pave Hawk is a twin-engine medium-lift helicopter operated by the Air Force Special Operations Command, a component of the US Special Operations Command. The basic crew normally consists of five: pilot, copilot, flight engineer, and two pararescuemen. The aircraft can also carry eight to ten troops. Pave Hawks are equipped with a rescue hoist with a 200ft cable and 600lb lift capacity.
The 98 Credible Hawks acquired in the 1980s were to be brought up to MH-60G Pave Hawk configuration in a two-phase program. Only 16 of the total of 98 MH-60Gs received the Phase 3 gear. These Pave Hawks were assigned the special operations role, while the other 82, with the Phase Two equipment fit, were assigned the CSAR role in October 1991 and redesignated HH-60G.

The Phase Two update included a Bendix-King 1400C navigation radar in a radome on the left side of the nose, an ANIASN-137 Doppler radar, a GPSIINS set, a moving-map display, secure communications, and improved defensive countermeasures.

The Phase Three update included an AN/AAQ-16 FLIR imager; a partial glass cockpit with twin flat-panel displays and a head-up display (HUD); a door mount on each side for a 12.7mm machine gun, along with the gun mount in each window; infrared lights for night refueling; and a ring laser gyro inertial navigation system.

Email ThisBlogThis!Share to TwitterShare to FacebookShare to Pinterest
Labels: helicopter