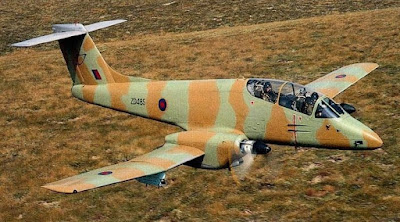 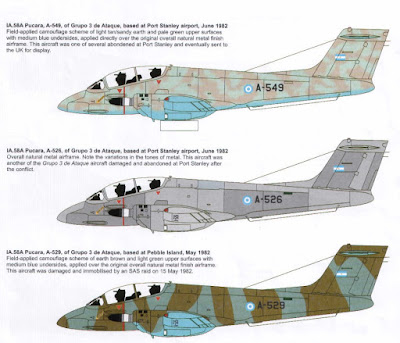 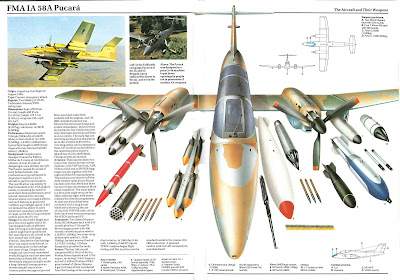 IA 58 is a two-seat light attack aircraft powered by two turboprop engines. It was named after a form of South American stone hill fortress. It was designed for the COIN (counterinsurgency) and CAS (close air support) roles for the Argentine Air Force. It has narrow fuselage and tail section and a tandem seat cockpit with a steep sloping nose. Because of the steep nose the pilot has excellent forward visibility. Although heavily armed the weapons are unguided and visually aimed by the crew.

The IA 58 only needs a minimum of ground support to operate; it is able to operate from unprepared rough terrain.

The IA 58A is the main production variant of the Pucará design. About 108 aircraft were built for Argentina of which 6 were sold to Uruguay. About 3 aircraft were captured by the United Kingdom during the Falkland War; they are now preserved by the RAF.

The IA 58B is basically a IA 58A with 30mm cannons in place of the 20mm cannons present in the A model. Although a prototype has been developed, none were produced.

The IA 58C is a multi-role single-seat version of the Pucará. The changes included the addition of a Head-up Display, IFF (identification friend of foe), 30-mm DEFA 553 cannons in the nose, two extra hardpoints for Magic 2 Air-to-Air missiles and additional weapons capability, including Martin Pescador anti-ship missiles.

The IA 58A is also operated by Colombia, Sri Lanka and Uruguay but only in small numbers.

History
In the mid 1960s the Argentine government issued a demand to the nation’s military aircraft producer, Fabrica Militar de Aviones (FMA), for a new combat aircraft suitable for the COIN, CAS and recce roles. On 20 August 1969 the initial prototype made its first flight. More prototypes were produced and on 8 November 1974 the first of 60 IA 58A production aircraft for the Argentinean Air Force made its maiden flight. In end 1975 deliveries began and initial operational capability was achieved. Followed in the 1970s by a second production run of 48 more aircraft.

First units were delivered in 1975 to the Argentine Air Force (Spanish: Fuerza Aérea Argentina, FAA), 3rd Air Brigade (Spanish: III Brigada Aérea) in northern Reconquista, Santa Fe province with almost 100 airframes delivered by 1982. The unit was deployed south during the Falklands War (Spanish: Guerra de las Malvinas), performing coastal surveillance from the Patagonia airfields. As the only aircraft available in substantial numbers for deployment on the islands (Port Stanley Airport paved runway was not long enough for FAA Skyhawks and Mirages to be deployed), many Pucarás were destroyed on the ground by British forces before taking part in actual combat.

The aircraft which did see combat were usually armed with unguided bombs, 2.75-in (70-mm) rocket pods, or 7.62mm machine gun pods. Apart from Port Stanley airport, Pucarás were also operated from two small grass improvised airfields at Goose Green and Pebble Island. They were used in the reconnaissance role and shot down a Royal Marines Scout on May 28, the only confirmed Argentine air-to-air victory of the war. After the war, one was taken back to the United Kingdom, currently in Duxford. A second example (serial number A-515) was taken to Boscombe Down, returned to flying condition and assessed by the RAF. It is now on display at the RAF Museum Cosford. A total of six Pucarás were destroyed in a single instance, along with another five aircraft damaged , when the SAS carried out the Raid on Pebble Island.

They have also seen combat duty in Sri Lanka.

In December 1989, Argentina delivered three Pucaras to Colombia on loan for use against drug manufacturers and smugglers.

In the 1990s Argentina tried to market about 40 IA 58A aircraft, reportedly held in storage at that time, to countries in Africa, however no report of a sale have yet occurred.

In the 1990s FAA Pucarás, received several minor upgrades, known as IA-58D, and as of 2007 they remain in service within the 3rd Air Brigade and with the Uruguayan Air Force.

In 2007, an IA-58 of the Fuerza Aérea Argentina was converted to carry a modified engine operating on soy-derived bio-jet fuel. The project, financed and directed by the Argentine Government (Secretaría de Ciencia Tecnología e Innovación Productiva de la Nación), made Argentina the second nation in the world to propel an aircraft with biojet fuel. The project intends to make the FAA less reliant on costly fossil fuels.