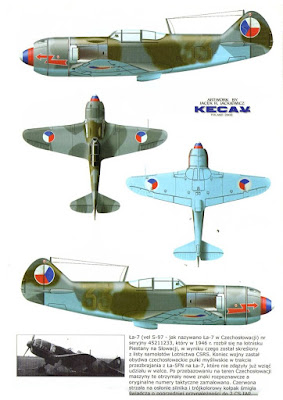 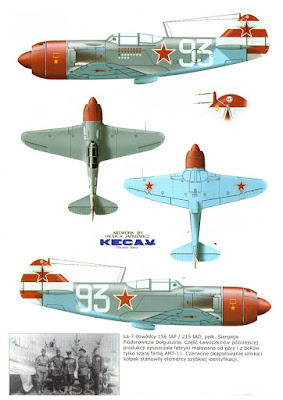 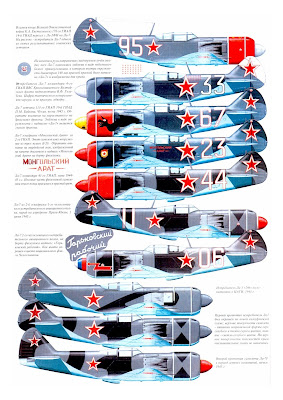 The Lavochkin La-7 was a piston-engined Soviet fighter developed during World War II by the Lavochkin Design Bureau (OKB). It was a development and refinement of the Lavochkin La-5, and the last in a family of aircraft that had begun with the LaGG-1 in 1938. Its first flight was in early 1944 and it entered service with the Soviet Air Forces later in the year. A small batch of La-7s was given to the Czechoslovak Air Force the following year, but it was otherwise not exported. Armed with two or three 20 mm (0.79 in) cannon, it had a top speed of 661 kilometers per hour (411 mph). The La-7 was felt by its pilots to be at least the equal of any German piston-engined fighter. It was phased out in 1947 by the Soviet Air Force, but served until 1950 with the Czechoslovak Air Force.

The etalon only made nine test flights in February and March 1944 before testing had to be suspended after two engine failures, but quickly proved itself to be the near-equal of c/n 39210206. It was 180 kilograms (400 lb) lighter than the earlier aircraft, which allowed the etalon to outclimb the other aircraft (4.45 minutes against 5.2 minutes climb to 5,000 meters). However it was 33 kilometres per hour (20.5 mph) slower at sea level, but only 4 kilometers per hour (2.5 mph) slower at 6,000 meters (19,685 ft). The flight tests validated Lavochkin's modifications and it was ordered into production under the designation of La-7, although the B-20 cannon were not yet ready for production and the production La-7 retained the two 20-mm ShVAK cannon armament of the La-5.

Five La-7s were built in March by Factory (Russian: Zavod) Nr. 381 in Moscow and three of these were accepted by the Air Force that same month. The Moscow factory was the fastest to complete transition over to La-7 production and the last La-5FN was built there in May 1944. Zavod Nr. 21 in Gorky was considerably slower to make the change as it did not exhaust its stock of wooden La-5 wings until October. The quality of the early production aircraft was significantly less than the etalon due to issues with the engine, incomplete sealing of the cowling and fuselage, and defective propellers. One such aircraft was tested, after these problems had been fixed, by the Flight Research Institute and proved to be only 6 kilometers per hour (3.7 mph) slower than the etalon at altitude. Aircraft from both factories were evaluated in September by the Air Force Scientific Test Institute (Russian: NII VVS) and the problems persisted as the aircraft could only reach 658 kilometers per hour (409 mph) at a height of 5,900 meters (19,357 ft) and had a time to altitude of 5.1 minutes to 5,000 meters.

Combat trials began in mid-September 1944 and were generally very positive. However four aircraft were lost to engine failures and the engines suffered from numerous lesser problems, despite its satisfactory service in the La-5FN. One cause was the lower position of the engine air intakes in the wing roots of the La-7 which caused the engine to ingest sand and dust. One batch of flawed wings was built and caused six accidents, four of them fatal, in October which caused the fighter to be grounded until the cause was determined to be a defect in the wing spar.

Production of the first aircraft fitted with three B-20 cannon began in January 1945 when 74 were delivered. These aircraft were 65 kilograms (143 lb) heavier than those aircraft with the two ShVAK guns, but the level speed was slightly improved over the original aircraft. However, the time to climb to 5000 meters increased by two-tenths of a second over the older model. More than 2000 aircraft were delivered before the war's end, most by Zavod Nr. 21. A total of 5753 aircraft had been built by Zavod Nr. 21, Nr. 381, and Nr. 99 in Ulan-Ude, when production ended in early 1946.

The La-7 ended the superiority in vertical maneuverability that the Messerschmitt Bf 109G had previously enjoyed over other Soviet fighters. Furthermore, it was fast enough at low altitudes to catch, albeit with some difficulties, Focke Wulf Fw 190 fighter-bombers that attacked Soviet units on the frontlines and immediately returned to German-controlled airspace at full speed. The Yakovlev Yak-3 and the Yakovlev Yak-9U with the Klimov VK-107 engine lacked a large enough margin of speed to overtake the German raiders. 115 La-7s were lost in air combat, only half the number of Yak-3s.
at October 05, 2018