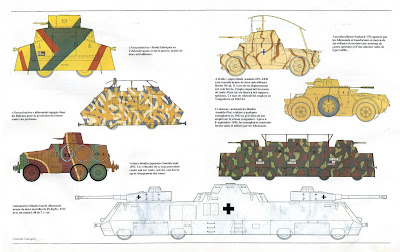 Tatra-Škoda armoured trolley
The period 1919 to 1938 saw the introduction of the Tatra-Škoda armoured trolley. During the 1920s the firm of Koprivnice built a reconnaissance trolley, which also interested the Poles, who purchased some twenty examples in 1926. It could be used coupled to a train (with the driving axle disconnected) or as an independent vehicle. The Armoured Trains Company received the only example purchased by the Czechoslovak Army in 1927. Top vehicle on the left side of illustration.

Leichte Schienenpanzer, le.SP.
It is a light Scout Car, 8 tons, 14.5mm armor plate, with a Steyer 76 hp air cooled motor (the same motor that was used in the s.SP). Because of its relative lightweight it could obtain speeds up to 70 kph. All cars had a large aerial antenna. The trains were specifically produced for use in the Balkans, as the track in that area could scarcely support the weight of a standard armored train. Second vehicle on the left side of illustration.

Type 9112 SO-MO armoured trolley
This heavy trolley,13 with the official designation of ‘91-Shiki Koki Kenisha’ or ‘Tractor for Wide Gauge, Type 91’, was identified by Allied wartime intelligence as the Type 93 ‘Sumida’ Armoured Car, an incorrect designation used ever since.

Built from 1930 onward, this 6x4 vehicle had plain wheels which could be fitted alternatively with solid rubber tyres for the road or with flanged rims for running on rails. Derived from the Naval Type 90 Armoured Car, it weighed 7 tonnes and carried 16mm of armour over its vitals.14
The road-rail conversion took around twenty minutes, and necessitated raising the vehicle by means of the four jacks fitted to the bumpers. In addition, the spacing of the wheels could be adjusted to suit the rail gauge. The trolley reached a maximum speed of 60km/h (38.5mph) on rails as against 40km/h (25mph) on roads. However, as the chassis was unidirectional and lacked a built-in turntable arrangement, it was necessary to couple two trolleys back-to-back to allow for rapid withdrawal under fire. It was armed with six 7.7mm Taisho Type 92 MGs, one of which was mounted in the turret.

Their principal zone of operations was the China and Manchurian theatres, but it seems that several examples were used in Indochina and Malaya. The stated production total of 100 examples could include the Naval Type 90 and the Army Type 91 versions. Third down vehicle on the left side of illustration.

Panhard Panzerspähwagen Trolley P204(f)
Forty of the 190 Panhard 178 armoured cars captured during the Battle of France were converted to trolleys and attached in pairs to each Type BP armoured train. The rail wheels were made by two firms: Gothaer Waggonfabrik and Bergische Stahlindustrie (Remscheid). Certain examples were fitted with buffers. Top vehicle on the right side of illustration.

The ‘Libli’ railcars
In 1942 it was decided to armour the ALn-556 railcars of the Ansaldo firm, for service in Yugoslavia. The Railway Engineers chose models produced from 1936 to 1938. They had to be shortened by 5.60m (18ft 4½in). The prototype was tested in the Ansaldo-Fossati workshops in Genoa, and was adopted on 5 September 1942, with several recommended changes, with the designation ‘Littorina blindata mod. 42 (Li.Bli 42)’. The first production model was rolled out on 20 September and joined the 1o Compagnia Autonoma Littorine Blindate. This company would receive eight railcars in total, and was made up of ten officers, twelve NCOs and 167 men. The 8.5mm armour protection was built in one piece, pierced only by access and maintenance hatches, and firing ports.

Armed with two tank turrets mounting 47mm guns, two versions were used at the same time. The first version had two openings in the roof to allow firing two 81mm Model 35 mortars, or flamethrowers through side apertures. The second had a circular tub with a pedestal-mounted 20mm Breda Model 35 cannon. The 8.5mm armour protection was built in one piece, pierced only by access and maintenance hatches, and firing ports.

When the Italian Armistice was signed, the ‘Liblis’ were based at Karlovac, Ogulin and Split (Croatia), Ljubljana and Novo Mesto (Slovenia) and Suse (in Italy, 30km/19 miles west of Turin). A series of machines was then ordered for the Wehrmacht in 1943. Third vehicle down on the right side of illustration.

The AB 40 and AB 41 trolleys
To supplement the ‘Libli’ railcars, a request was made on 24 July 1942 for the conversion of twenty AB 40 and AB 41 armoured cars into road/rail vehicles, to be used equally on the road or on rails simply by changing the wheelsets. The modifications also included adding sanding boxes to the front and rear wings, and one swivelling headlight. The first version could be recognised by its low turret armed with two 8mm Breda Model 38 machine guns. The AB 41 received a higher turret, an automatic 20mm 20/65 cannon and one Breda machine gun. Lastly, the AB 43, of which only an experimental model existed in road/rail form, mounted a 47mm gun. Second vehicle down on the right side of illustration.

Panzerjägertriebwagen 51, 52 and 53. Built in late 1944, but never put into service, these tank-destroyer railcars were armed with turrets from PzKpfw IV Ausf H or J. One of them was captured and put into storage in an American depot in Augsburg, and the other two were damaged by bombing in the Linke-Hofmann factory in Breslau. At bottom of illustration.

Prior to WW2 the Japanese Empire had already made extensive use of draisines such as the Sumida M.2593 in Manchuria and the Sino-Japanese war.

Poland used armoured trains extensively during the Invasion of Poland. One observer noted that "Poland had only few armoured trains, but their officers and soldiers were fighting well. Again and again they were emerging from a cover in thick forests, disturbing German lines". One under-appreciated aspect of so many Polish armoured trains being deployed during the Polish Defensive War in 1939 is that when German planes attacked the railroads, it was usually the tracks themselves. As late as September 17, three fresh divisions in the east were moved westward by train. On September 18, three more divisions followed.

This in turn prompted Nazi Germany to reintroduce armoured trains into its own armies. Germany then used them to a small degree during World War II. However, they introduced significant designs of a versatile and well-equipped nature, including railcars which housed anti-aircraft gun turrets, or designed to load and unload tanks and railcars which had complete armour protection with a large concealed gun/howitzer. Germany also had fully armoured locomotives which were used on such trains.

During the Slovak National Uprising, the Slovak resistance used three armoured trains. The Hurban, Štefánik and Masaryk, which were built in the Zvolen railway factory, are preserved and can be seen near Zvolen Castle.

The Soviets had a large number of armoured trains at the start of World War II but many were lost in 1941. Trains built later in the war tended to be fitted with T-34 or KV series tank turrets. Others were fitted as specialist anti-aircraft batteries. A few were fitted as heavy artillery batteries often using guns taken from ships.

Canada also (briefly) used an armoured train to patrol the Pacific coast and guard against a possible Japanese invasion.

Twelve armoured trains were formed in Britain in 1940 as part of the preparations to face a German invasion; these were initially armed with QF 6 pounder 6 cwt Hotchkiss guns and six Bren Guns. They were operated by Royal Engineer crews and manned by Royal Armoured Corps troops. In late 1940 preparations began to hand the trains over to the Polish Army in the West, who operated them until 1942. They continued in use in Scotland and were operated by the Home Guard until the last one was withdrawn in November 1944. A 6-pounder wagon from one of these trains is preserved at the Tank Museum. A miniature armoured train ran on the 15-inch gauge Romney Hythe and Dymchurch Railway. 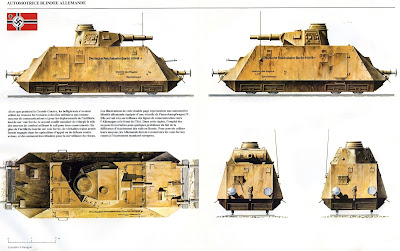 Steyr armoured trolleys
The light armoured reconnaissance trains Panzerzug (le.Sp) 301 to 304 created on 16 September 1943 were sent to the Balkans. No 301 operated in March and April in Serbia in the Ujse-Raska region and was destroyed at the end of the year. No 303 would be captured at the end of the war and No 304 was destroyed. To the best of our knowledge only one of these trolleys survives, in Trieste, being the one used by the British in their zone.

Email ThisBlogThis!Share to TwitterShare to FacebookShare to Pinterest
Labels: railway