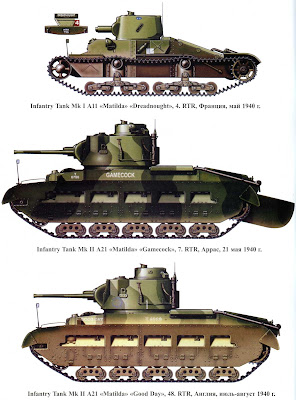 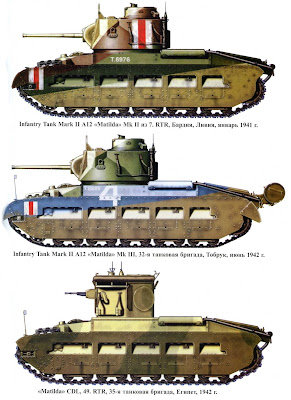 Canal Defence Light
The device known under the cover name Canal Defence Light was one weapons of World War II that was destined hardly ever to be used. In essence it was a simple idea, in which the normal gun turret of a tank was replaced with another housing an intense light to illuminate battlefields at night. All manner of tactical ploys were advocated for its use, ranging from simply blinding an enemy to providing general target illumination.

The idea of mounting powerful searchlights on tanks was first mooted during the mid-1930s by a group of interested civilians who ’sold’ the idea to the War Office in 1937. The War Office carried out a series of development trials under conditions of great secrecy, and by late 1939 a turret was ready for production. The secrecy continued with the project being known as the Canal Defence Light, or CDL. The first turrets produced were for the Matilda II infantry tank, and all that the fitting of a CDL involved was the removal of the normal turret and its replacement by a new one, though changes had to be made to the Matilda’s electrical systems as well, In the turret the searchlight was positioned behind a vertical slit in which was a shutter. In use the searchlight was switched on and the shutter was opened and closed very rapidly to provide a flickering impression to an observer in front. This flickering made the range of the CDL light difficult to determine, and anyway the light was so powerful that it was difficult to look into the beam even at quite long ranges.

Some 300 CDL turrets were ordered to convert Matildas to the CDL role, and one brigade of Matilda CDL vehicles was based in the UK and another in North Africa. The military planners were determined to use the impact of the CDL units to the full and constantly awaited the chance to use them to maximum effect. That chance somehow never came and the North African campaign was over before the CDLs could prove their worth. However the Normandy landings lay ahead, and it was planned to use the CDLs there. But at the same time it was felt that the CDL turrets should be placed on something rather more up-to-date than the slow and stately Matildas, so Grant tanks became the chosen carriers. 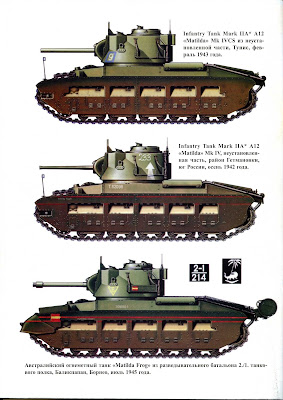 A requirement for a British army 'Infantry' tank was first made in 1934 and the immediate result was the All Infantry Tank Mk I, later nicknamed Matilda I. This was a very simple and small tank with a two-man crew but with armour heavy enough to defeat any contemporary anti-tank gun. The small turret mounted a single 7.7-mm (0.303-in) Vickers machine-gun and the engine was a commercial Ford V-8 unit. Orders for 140 were issued in April 1937, but when the type was tried in combat in France in 1940 it revealed many shortcomings: it was too slow and under armed for any form of armoured warfare, and the small numbers that remained in service after Dunkirk were used only for training.

The Matilda I was intended only as an interim type before the A12 Infantry Tank Mk II became available. This project began in 1936 and the first examples were completed in 1938. The Mk II, known later as Matilda II, was a much larger vehicle than the Matilda I with a four-man crew and a turret mounting a 2-pdr (40-mm/1.575-in) gun and liberal belts of cast armour (varying from 20 to 78 mm/0.8 to 3.1 in in thickness) capable of defeating all known anti-tank guns. The Matilda II was slow as it was intended for the direct support of infantry units, in which role speed was not essential. Overall it was a good-looking tank and it turned out to be far more reliable than many of its contemporaries. And despite the light gun carried it was found to be a good vehicle in combat. The Matilda IIA had a 7,92-mm (0.312-in) Besa machine-gun instead of the Vickers gun.

The main combat period for the Matilda (the term Matilda II was dropped when the little Matilda I was withdrawn in 1940) was the early North African campaign, where the type's armour proved to be effective against any Italian or German anti-tank gun with the exception of the German '88'. The Matilda was one of the armoured mainstays of the British forces until El Alamein, after which its place was taken by better armed and faster designs. But the importance of the Matilda did not diminish, for it then entered a long career as a special-purpose tank.

One of the most important of these special purposes was as a flail tank for mine-clearing. Starting with the Matilda Baron and then the Matilda Scorpion, it was used extensively for this role, but Matildas were also used to push AMRA mine-clearing rollers. Another variant was the Matilda CDL (Canal Defence Light), which used a special turret with a powerful light source to create 'artificial moonlight', Matildas were also fitted with dozer blades as the Matilda Dozer for combat engineering, and many were fitted with various flame-throwing devices as the Matilda Frog, There were many other special and demolition devices used with the Matilda, not all of them under British auspices for the Matilda became an important Australian tank as well. In fact Matilda gun tanks were used extensively by the Australian army in New Guinea and elsewhere until the war ended in 1945, and they devised several flame-throwing equipments. The Germans also used several captured Matildas to mount various anti-tank weapons of their own.

It is doubtful if a complete listing of all the many Matilda variants will ever be made, for numerous 'field modifications' and other unrecorded changes were made to the basic design. The first Matilda was produced in 1937 but only two were in service when war broke out in September 1939. Some 2,987 tanks were produced by John Fowler & Co., Ruston & Hornsby, and later London, Midland and Scottish Railway, Harland and Wolff, and the North British Locomotive Company. Production was stopped in August 1943. But the Matilda accommodated them all and many old soldiers still look back on this tank with affection for, despite its slow speed and light armament, it was reliable and steady, and above all it had good armour.

Matilda chassis with mine flail.

Matilda chassis with a mine flail.

The normal turret was replaced by a cylindrical one containing a searchlight (projected through a vertical slit) and a BESA machine gun.

A naval Hedgehog 7-barrel spigot mortar was mounted in an armoured box on the rear hull of several Australian Matilda tanks. The mortars were hydraulically elevated and electrically fired either individually or in a salvo of six, the fifth tube could not be fired until the turret was traversed to move the radio antenna out of the bomb's path. Each bomb weighed 30 kg and contained 14 kg of high explosive, the range of the bombs was up to 400 metres and aiming accomplished by pointing the entire tank as the mortars had no traverse independent of the hull of the tank.[2]

A Close Look and Personal Experience

The Matilda Mk II was highly feared by the Germans and Italians in the early North African campaigns. Its main gun, the 2pd was very effective against the Italians throughout the war, and could penetrate German tanks until they added "face-hardened" steel plates to their tanks. The added plates had the effect of shattering the 2pdr shell. Still there were few German tanks that could penetrate the Matilda II until the introduction of the HEAT rounds or the 75mm L/43 in the Pz. IV. The APCR rounds could also penetrate the Matilda, but since these rounds used critical Tungsten steel the sights for the round were set ONLY for short ranges, at which a hit was a near guarantee.

The Matilda was not a perfect tank, it had its drawbacks. I got into the driver's compartment years ago. It wasn't so much that I was entering a tank, but that I would putting on a tank. It was a tight fit. In the turret the crew varied from one to two. One crew member meant it shared the same disadvantage as the French tanks. That crew member had to be the commander, loader and gunner. In addition the cannon in the early British tanks lacked a geared elevating mechanism, instead had a shoulder pad that you fitted to your shoulder and adjusted the elevation by moving your body up and down. There was a tightening clamp that allowed you to adjust the tension and allowed you to lock in once you were on target, but it was still not a very desirable solution. Two people in the turret was an improvement of your duties, but it made the room for those men very tight. The Matilda was a small vehicle. Another disadvantage was the slow speed of the tank, generally 8 mile per hour. It didn't allow for rapid reactions to a mobile enemy. Still in attack the Matilda II was a formidable weapon. They were well armored and rather impervious to German 37 mm and Italian 37 mm AT fire. Though designed for infantry support they sported small caliber 40mm/2lb AT gun. Though better than the German 37mm and Ital 47 mm in armor piercing they were not produced with a HE shell. (Some ammunition was converted to use the Bofor's 40 mm HE AA shell though). I understand it was not as mechanically reliable as the Pz III but better than the M13/40 and overall not bad.