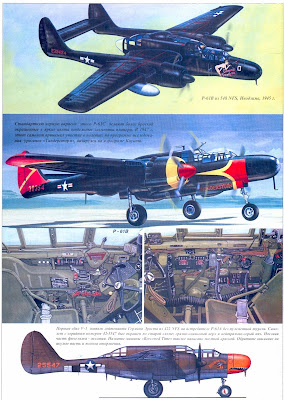 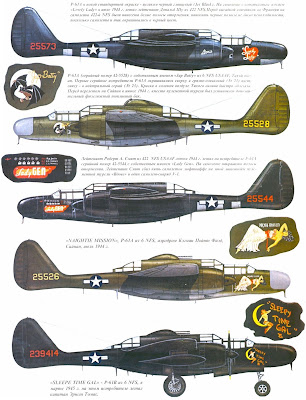 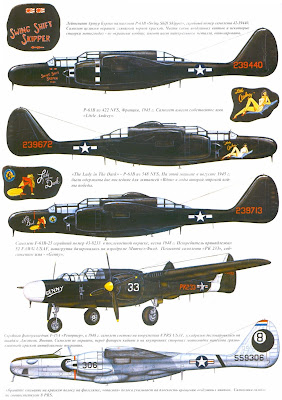 Without doubt one of the finest night-fighters of the war, the powerful P-61 was one of the few Allied aircraft that was specifically designed for the task. The Black Widow served with particular distinction in the Pacific, often as a night intruder on offensive missions against land and sea targets.

With the beginning of the night bombing offensive in Europe in 1940, U.S. interest in the field of specialist night-fighters was increased. The U.S. Army Air Corps issued a general requirement for a new night-fighter. The Northrop response involved a large, twin-engine aircraft with a twin-boom tail and accommodation for three crew as well as an airborne interception (AI) radar of a type then still under development. A heavy cannon armament was also provided.

Further impetus for the programme was derived from British work on the cavity magnetron, of which the U.S. had been informed via the Tizard mission, which provided details of Britain’s advanced-technology military projects. Use of the cavity magnetron allowed radars to operate in the more effective centimetric wavelength. After Anglo-American work on the radar, this finally emerged as the SCR-70 AI radar for installation in the night-fighter.

In January 1941 two XP-61 prototypes were ordered and within the next 13 months contracts were awarded for a total of 573 aircraft. A first flight by a prototype was completed in May 1942 but it was another year and a half before production P-61As became available. In the meantime, development testing continued using a total of 13 YP-61 service test aircraft.

In the first batch of 37 production aircraft, the P-61A was armed with a remotely controlled dorsal turret that mounted four 12.7mm (0.5in) machine guns. This was complemented by four fixed 20mm (0.79in) cannon carried in the belly. The dorsal turret, however, was found to create aerodynamic problems when slewed to the beam position, and was removed from the 38th aircraft onwards. Initial deliveries were made to the 18th Fighter Group stationed at Guadalcanal. The unit achieved a first Black Widow victory in July 1944, with the downing of a Japanese Mitsubishi G4M bomber, and the aircraft went on to replace the Douglas P-70 that had been issued previously as a stopgap night-fighter.

The initial production P-61A exhibited certain shortcomings, in particular in regard to the Pratt & Whitney .R-2800-65 engines, which suffered from reliability problems. In all, 200 P-61As were completed before production switched to the improved P-61B, deliveries of which began in July 1944.

‘Widow’ Intruders
Although always classed as a night-fighter, the P-61B version saw increasing use as a night intruder, and was capable of carrying weapons loads including four 726kg (1600lb) bombs, or four 1136-litre (300-U.S. gal) drop tanks under the wings. Serving in the Far East, some aircraft were further adapted in field in order to carry 127mm (0.5in) rocket projectiles that were employed against Japanese shipping. In the last 250 P-61Bs, the dorsal turret was reinstated.

Although best associated with the war in the Pacific, Black Widows also saw combat with the USAAF in Europe. Here, the initial operator was the 422nd Night Fighter Squadron at Scorton, England, which received P-61As in May 1944. During their very first combat mission in theatre, P-61s based in England succeeded in downing four German bombers. The Black Widows of the 422nd Night Fighter Squadron were later joined in England by those of the 425th NFS, and between them these units were intended to provide night protection of U.S. bases in the run-up to D-Day.
Another European mission involved interception of V-1 flying bombs, with limited success, before the Normandy invasion saw the European Black Widows move to bases on the Continent, from where they harassed the remnants of the Luftwaffe in the final months before VE-Day.

The F-15A Reporter was a two-seat reconnaissance version of the P-61E, the latter which had been planned as a long-range escort fighter to accompany the B-29 over Japan, but which won no orders. A total of 36 production F-15As were produced for post-war service, using part-completed P-61C airframes. Compared to the Black Widow, the Reporter featured slimmer engine nacelles and a ‘teardrop’ cockpit canopy.

P-61 Armament
This early P-61A reveals the original General Electric dorsal turret that was subsequently removed after it was found to be prone to buffeting. This was the same turret as used in the B-29, and was armed with four 12.7mm (0.5in) machine guns, each of which was provided with 800 rounds of ammunition. In service, however, and in order to both increase firepower and make use of the assigned three-man crew, some units in the Pacific flew aircraft with the dorsal turret still mounted, but in a fixed, forward-firing position. The dorsal turret (if fitted) was complemented by four 20mm (0.79in) Hispano cannon that were mounted in the belly, below the fuselage, in a staggered installation. Containers were provided fore and aft for a total of 200 rounds per gun.