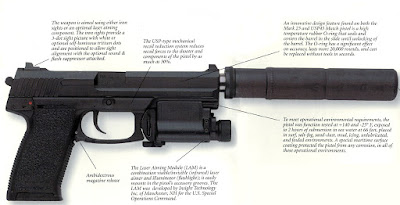 In 1991 USSOCOM, the overall command for special operations, awarded contracts to Heckler & Koch and to Colt Manufacturing Co. to submit test pistols for a new Offensive Handgun Weapon System (OHWS). As the name of the system suggests, the new pistol was not to perform in a traditional defensive role but as a specialized offensive weapon for special operations. The government intended to issue the new weapons to elite organizations such as the Army’s Special Forces (Green Berets) and Rangers, Special Operations Aviation, the Navy SEALS, and the Air Force Special Operations Wings. The new weapon system required chambering for the caliber .45 ACP cartridge, a sound and flash suppressor, and a LAM. More powerful than the general-issue 9mm NATO Beretta M9, the OHWS was to be the first caliber .45 ACP government pistol since the Colt Model 1911A1. After extensive testing, USSOCOM awarded the final contract to Heckler & Koch; the first pistols were delivered on 1 May 1996.

Although larger and heavier, the winning design, designated the Mark 23 mod 0, shares many design features of the H&K caliber .45 USP, including its locking system, steel-reinforced polymer components, and advanced anticorrosion coatings. The polygonal bore is also chrome-plated to resist wear and corrosion. The trigger guard is recurved at the front for two-handed use, and the magazine release and safety are ambidextrous. Unlike the USP, the decocking lever is a separate component to allow the silent lowering of the hammer in close or covert combat situations. Frames are grooved for the attachment of the LAM, and the muzzle is threaded to accept a silencer supplied by Knight’s Manufacturing USA. Magazine capacity is 12 rounds.

The Mark 23 mod 0 is possibly the most thoroughly tested handgun ever built and exceeded all government specifications during trials. The issue pistol achieves match-grade accuracy and operates almost flawlessly in the most extreme environments.