One of the armoured carriages from the Polish ‘Danuta’ armoured train with a turreted 100-mm howitzer on the left, a 7.92-mm (0.31 -in) machine-gun in the centre and a turreted 75- mm field gun on the right. The few Polish armoured trains not destroyed were taken over by the Germans. 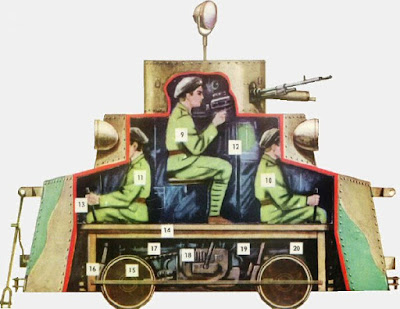 Almost as soon as Poland was established as a nation in 1919, the new Polish army started to accumulate a number of types of armoured train with which to defend its exposed borders. The trains were initially used to take troops and heavy armament to any particular front or locality as and when required, for it was impossible to post troops to cover every potential border crossing point, especially on the wide plains of the eastern Polish frontier with the Soviet Union. In time some of these early armoured trains were withdrawn and replaced by more formal designs intended specifically as armoured trains rather than merely a collection of protected railway wagons.

Typical of these new equipments was the Pociag Pancerny nr 11 (PP nr 11) and named 'Danuta'. When complete this train consisted of two armed wagons, an accommodation and control wagon equipped with radio, and an armoured locomotive. To these could be added two flat-bed wagons, one at the front and one at the back, which had no function other than to protect the train proper from the possible effects of mines laid under the tracks and fired by wheel pressure, Thus, from the front, such a train would comprise a flat-bed wagon, one of the two armed wagons, the control carriage (also armoured), the armoured locomotive, the other armed wagon, and the second flat-bed wagon. The armed wagon was a four-axle design with two axles at each end. At the ends were two circular turrets, one mounting a 100-mm (3.94-in) howitzer of Austro-Hungarian origins and the other a 75-mm (2,95-in) gun, A small central turret mounted a 7.92-mm (0,3l-in) machine-gun.

The 'Danuta' was but one of many Polish armoured trains still in service in 1939 when the Germans invaded. Each of the Polish armoured trains had its own name, usually of a Polish folk or national hero such as 'Paderewski', 'Grozny', 'General Sosnkowski' or Marszalek'. To these were added a number of improvised trains that were hurriedly formed in 1939, usually by simply adding steel plates to existing railway rolling stock. No two examples of these armoured trains appear to have been alike other than the fact that they nearly all had two-turret wagons somewhere in their formation. Again, no two of these twin-turret wagons were identical in design although most had one 100-mm (3.94-in) turret and one 75-mm (2.95-in) turret with a machine-gun of some form or another in the small central turret. There were also a number of smaller twin-axle wagons with single turrets having 75-mm (2.95-in) guns and firing ports or small turrets for machine-guns. To add to the number of types in service there were also small wagons with their own truck-type engines carrying a small machine-gun turret. Typical of these was the 'Tatra' which mounted a Hotchkiss machine-gun.
One Polish innovation was the adaption of railway wagons for the carriage of light tank, often as part of armoured trains. These could carry either the light Renault M1917 tank or the little TKS tankettes that were little more than machine-gun carriers.

For all their gun power and degree of design sophistication, nearly all the Polish armoured trains lacked one key weapon and that was some form of anti-aircraft armament. In 1939 this proved to be a serious drawback for in the face of Luftwaffe air supremacy the Polish armoured trains were either unable to move or were attacked when they attempted to do so, Many of them were destroyed by air attack and the few left were taken over by the Germans, at first for internal security duties but later in the Soviet Union on anti-partisan operations.
at October 20, 2018

Email ThisBlogThis!Share to TwitterShare to FacebookShare to Pinterest
Labels: railway