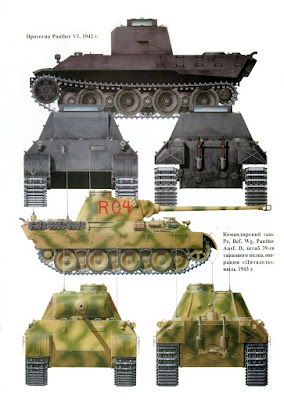 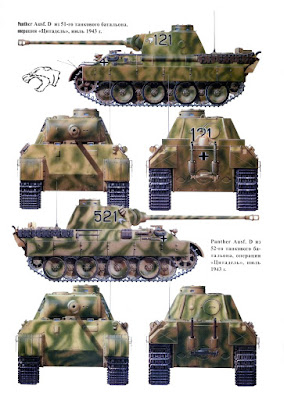 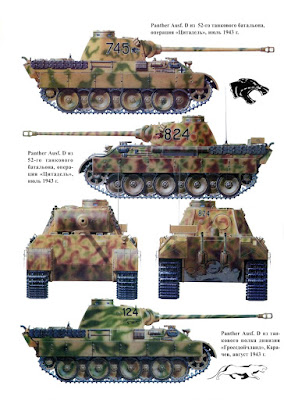 The VK 3002 (MAN), which was known unofficially as the Panther during the course of its development, was well shaped but was too heavy and too high to be a medium tank replacement for the Pz Kw IV. As usual the constant modifications called for during development increased the original weight from 35 tons until it finally reached 43 tons. After 20 vehicles had been built with the specified frontal armour 60 mm thick, an increase of the nose armour to 80 mm was ordered. The engine originally planned, the Maybach HL 210, was no longer considered powerful enough and was replaced by the more powerful HL 230 P 30. This was basically the same engine but its capacity had been raised from 21 to 23 litres by enlarging the cylinder bore. This engine was put into all production vehicles and was used until the end of the war. The HL 230 P 30 was a short V-12 petrol-driven engine producing 700 hp at 3000 rpm. In service however it was limited to 2500 rpm. Maybach used an eight-bearing crankshaft which just fitted the limited area of the Panther engine compartment. Together with several other licensees (including Daimler-Benz and Auto-Union) Maybach produced nearly 1000 of these 700 hp engines each month.

As the Pz Kw V differed radically from the Pz Kw III and IV, newly developed mechanical units had to be fitted because of the increased weight and the alterations to the hull shape. The hand-operated AK 7-200 type gearbox had seven speeds, all with synchromesh. It. was intended for an engine producing 800 hp at 3000 rpm and a torque of up to 175 mkg. The weight of the gear with clutch and crown wheel was 750 kg. An LAG 3/70 H dry clutch was fitted. New steering gear and steering brakes were developed by MAN. Steering was effected by Argus disc brakes, operated hydraulically. Each track could be halted separately when the steering brake was used to steer the tank, after the epicyclic brake had been released and the steering clutch disconnected. In addition to this, when the epicyclic brake was released the direct gear of the epicyclic could be driven, via a steering clutch and a pair of pinions, against the' direction of the main drive. In this way the relevant track was retarded and the vehicle travelled in each gear through a curve of fixed radius. Hence the description "single radius steering gear".

The bogies were carried on double torsion bars which lay transversely, each radius arm having two hair-pin-shaped torsion bars. This arrangement gave the Panther the best designed suspension of all German tanks. One disadvantage was the amount of space taken up by this type of springing. The bogie wheels were of the interleaved disc type with rubber tyres. Front sprockets and rear idlers, which also acted as tensioning wheels, together with two hydraulic shock absorbers and a return roller each side, completed the suspension. The unlubricated, 86-link track, designed for the original 35-ton prototype, was 660 mm wide and the width was not increased in the heavier production model. To increase the adhesion on icy surfaces the track was fitted with non-skid ribs, which were placed between the links. Chassis, hull and superstructure were integral and comers of the armour-plated hull were interlocked.

In addition to the 7.5 cm 42 L/70 gun there were two MG 34s. Seventy-nine rounds of tank gun ammunition were carried and the fuel supply of 720 litres was in five tanks. Power take-off to traverse the 8-ton turret was taken from a main shaft which lay between the two half shafts. This main shaft was mounted in a housing and worked the turret drive and the two oil pressure pumps for the steering mechanism.

Initially the specifications called for a fording depth of 1900 nun and a submersible depth of up to 4 metres. Full waterproofing was never fully developed however, and in consequence it was not 100 per cent effective on production vehicles.

In the Marks III, IV and VI the crews' kit was carried in stowage boxes on the rear turret walls, but in the Panther these were fitted left and right of the lower hull plate.

Production of the Panther began in November 1942 at the MAN factory, and its official designation was "Pz Kw V Panther Ausf D (Sd Kfz 171)". In the first production model the wireless operator's bow MG aperture was of the shutter type. Some of these early machines had the commander's cupola fitted on the left hand side of the turret. The combat weight was 43 tons.

The Panther's importance in the re-equipping of armoured units is evident from the fact that the production programme, which went into operation immediately, called for an output of 250 vehicles per month. A revised production programme dated September 1942 increased the monthly output to 600 Panthers up to and including the spring of 1944.

It was clear from this ambitious scheme that additional manufacturers would have to be brought into the production programme. The first production vehicles very quickly showed the teething troubles resulting from over-hasty development. Representatives of the industry and of the troops continually warned against putting these new vehicles into service prematurely. There were not only the usual teething troubles of a new design, but deep-rooted problems which could only be eradicated after thorough tests and fundamental alterations, and the armoured units had little confidence in the vehicle. The increased weight, which was greater than the original specification laid down, led to excessive wear of gears and shafts and the more powerful engine stretched the transmission to its limits. In this and the suspension were the main weaknesses of this otherwise very successful vehicle. In a speech at Hider's HQ in March 1943 Guderian emphasised that under no circumstances could the Panther be expected to enter service earlier than July 1943. The results of troop trials at Erlangen and Grafenwohr only confirmed this.

Despite these deficiencies tank battalions equipped with Panthers were ordered to take part in the Kursk Offensive or Operation Citadel. All the gloomy mechanical predictions were fully realised. Most of the vehicles unloaded in Orel and driven to Byelograd broke down en route. Engine fires caused by insufficient cooling and damage to gears and tracks ruined the outstanding potential of the armament as the vehicles were continually being taken out of service because of mechanical troubles and in some cases did not reach the battlefield at all.

These mechanical troubles made the first production batch of Panthers, almost without exception, unfit for front line service. In 1944 an official High Command memorandum acknowledging these weaknesses said: "... the mechanical weakness of the cross shaft on the Pz Kw IV and V led to such high unserviceability that the demand for replacement parts could not be met, despite the great efforts of the factories, without interfering with production..."

In February 1943 the Maschinenfabrik Niedersachsen-Hannover were brought into the Panther production programme. Henschel produced 200 Panthers between March and November 1943. From mid-1943 onwards Daimler-Benz went over to mass production of the Panther. The following firms took part in the production of armour and turrets: Dortmund-Hörder Hüttenverein of Dortmund, Eisenwerke Oberdonau of Linz, Ruhrstahl of Hattingen, Böhler of Kapfenberg, Bismarckhütte of Upper Silesia and Harkort-Eicken of Hagen. Numerous other component suppliers took part in the Panther building programme and production was given the "SS" priority rating.
at October 05, 2018