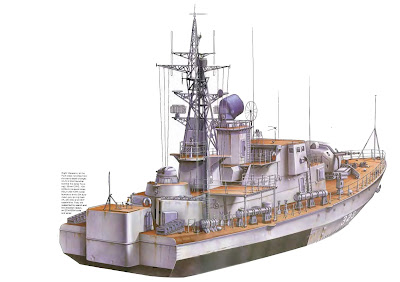 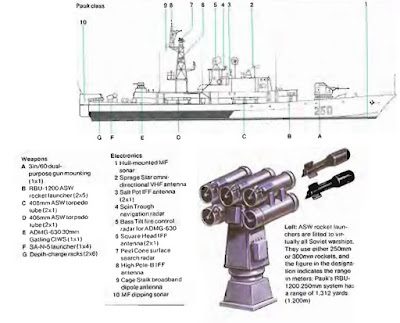 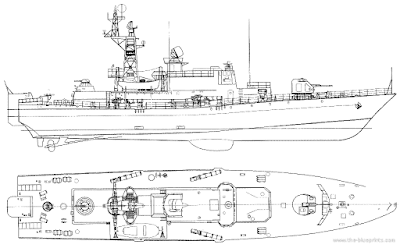 The Pauk class is the NATO reporting name for a class of small patrol corvettes built for the Soviet Navy and export customers between 1977 and 1989. The Russian designation is "Project 1241.2" Molniya-2. These ships are designed for coastal patrol and inshore anti-submarine warfare. The design is the patrol version of the Tarantul class corvette which is designated "Project 1241.1" by the Russians, but is slightly longer and has diesel engines. The boats are fitted with a dipping sonar which is also used in Soviet helicopters.

The superstructure the Molniya is divided into 3 levels, 3 different types of radar installation.
First, the upper which has installed fire-control radar for anti-ship missile Garpun-Bal-E (in Project 1241 RE Tarantul, radar is located on the top of the mast), followed by the fire control radar MR-123 Vympel for gunboat AK-176 and rapid firing AK-630 guns, on top of the mast to install the target search radar MR 352 positiv-E (note ship missiles Project 1241 RE Tarantul does not have this type of radar ).

Masts of Project 1241 RE Tarantul circle at an angle to the rear has also mast vertical box Molniya and lower,  the second mast column has installed 2 electronic warfare systems.

Power source system of the two ships are the same are used engine CODOG (combined diesel gas turbines). The displacement of Molniya is little more than a little than Tarantul due carrying more missiles (550 tonnes compared with 490 tonnes).

Overall, the combat capability of the Molniya is higher than with Tarantul.