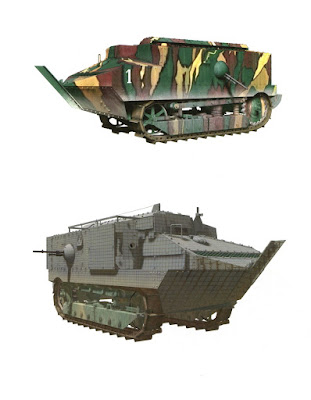 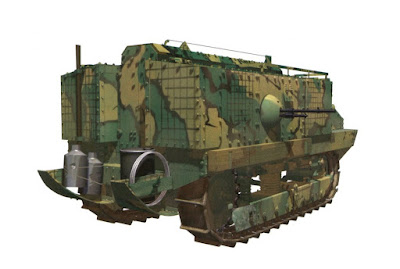 The first French tank. Based on the Holt Tractor design, the first were ordered beginning in February 1916. The Schneider Char d'Assaut 1 (CA1) went into action on the Chemin des Dames on 16 April 1917, during the Nivelle Offensive. Later the Japanese purchased a few. Designed primarily for infantry support, the CA1 had poor cross-country mobility and trench-spanning ability; gasoline tanks were vulnerable to enemy fire. 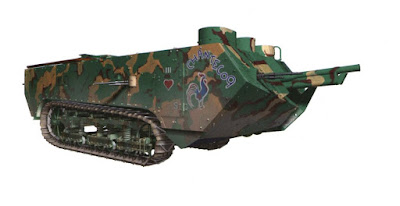 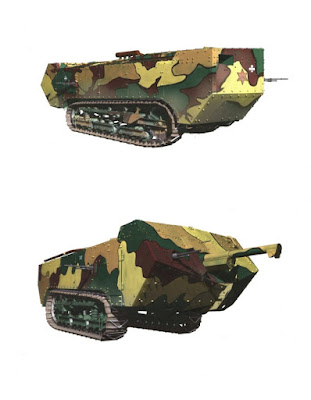 Ordered slightly after the CA1, the St. Chamond first saw action in the April 1917 Nivelle Offensive. At end of the war 72 of 400 were still in service. Later Lithuania and Spain secured some examples. Dual controls allowed the St. Chamond to be driven from either end, but like the Schneider it suffered from poor cross-country performance.

Although the British built the first tanks, the French actually built many more of them (4,800 French tanks to 2,818 for the British). The French first became interested in a tracked vehicle in 1915, as a means to flatten barbed wire. Then, that December, a French artillery colonel, Jean E. Estienne, wrote General Joffre suggesting that the French build caterpillar-type vehicles similar to the Holt tractors he observed in use by the British to move about their artillery. Estienne, who stressed the need for speed in development, proposed an armored box that would mount a quick-firing gun.

In February 1916, following an investigation of the possibilities, Joffre ordered 400 of these from the Schneider Company and, shortly thereafter, another 400 from the Compagnie des Forges d'Honecourt at Saint Chamond. The first Schneider CA1 was delivered to the French Army on 8 September 1816. It was not an innovative design. It basically consisted of an armored box hull mounted on a Holt tractor chassis. The chief changes from the original design were that the Schneider had a crew of six men rather than four and mounted a short 75mm gun instead of a 37mm main gun. The Schneider weighed some 32,200 pounds and had a vertical coil suspension system. Double doors at the rear provided access for the crew, and there was a ventilator attached to the top. The 75mm main gun was mounted on the right-hand side facing forward; the Schneider also had two machine guns, one to each side. Maximum armor thickness was 11.5mm and its 70-hp liquid-cooled engine could drive the tank at a maximum speed of 3.7 mph.

The St. Chamond was far bigger than the Schneider. It weighed 50,700 pounds and had a 90-hp engine that produced a maximum speed of 5.3 mph. Dual controls allowed the tank to be driven from either end, but it had poor cross-country maneuverability. Its crew of nine men manned a 75mm main gun and four machine guns. Its 75mm, unlike that on the Schneider, was a normal rather than short-barreled gun. Unlike the British, the French did not place great emphasis on trench-spanning or cross-terrain capability in their armored vehicles and thus their types were inferior to those of their ally in cross-terrain capability. The Schneider could only span a trench of 70 inches, a major shortcoming. The St. Chamond could span an 8-foot trench. As with all the early tanks, the St. Chamond was mechanically unreliable; and with the moving parts of the engine exposed inside the tank, the tank interior was a dangerous place for the crew. The St. Chamond seemed superior on paper to the Schneider because of its superior main gun, longer track, and an electrical as opposed to mechanical transmission, which made driving it far easier. But its greater weight made it less maneuverable over soft ground, and the front of its hull projected well over the tracks, greatly reducing its trench-spanning ability. It also was far less reliable mechanically than the Schneider.

By the summer of 1916 the British and French were producing numbers of tanks, but unfortunately for the Allied side, there was no design coordination or joint plan for their use. The British, who had the lead in their production, were also the first to employ tanks in battle.

Astonishingly, the French and British worked on the new war weapons quite independently. As with the British, the French endeavored to keep their work secret; but unlike their ally, the French resisted the temptation to use the new weapon before they thought they had sufficient numbers. One can thus imagine the chagrin of the French to learn that the British had employed their tanks first. The French did not deploy their tanks until seven months later, during the April 1917 Nivelle Offensive on the Western Front.

In July 1916 Colonel Estienne had been reassigned from his artillery command at Verdun and attached to Joffre's headquarters in order to organize and command the French tank units, what became known as the "Artillerie d'assault." Estienne organized the tanks into groups (groupes) of 16 tanks each, each of which was organized as the artillery into four batteries of four tanks. Organization of the Artillerie d'assault began in August 1916 at Marly near Paris (the first group was organized that October). Later the French established a training center at Cercottes near Orléans. Estienne also established his headquarters at Champlieu, where a tank camp was also located. By the end of March Estienne had assembled there 13 groups of Schneiders and two of St. Chamonds. The crews were drawn from the army and even the navy, but for the most part they came from the cavalry, which was steadily being reduced in numbers during the course of the war. As with the first British tank units, the crews for the most part lacked any technical expertise whatsoever, although the French assumed that two to three months' training would be sufficient.

Much to Estienne's profound disappointment, the British employment of tanks at the Somme the previous September ended the possibility of a surprise mass attack and caused the Germans to widen their trenches. His original plan had been for a surprise mass attack against the German trenches in which the tanks would precede the infantry. Upon crossing the first trench line, half of the tanks were to pin down the German defenders with fire, allowing the infantry to flow through the gaps opened and secure the German trenches.

Estienne now scaled down his ambitions and developed new tactics. Under these, the tanks were assigned the more modest role of serving as a form of "portable artillery" operating in support of infantry. Their task was to accompany the infantry and reduce those pockets of resistance not wiped out in the preliminary bombardment. This became stated French armor doctrine into World War II.
Estienne's general order of January 1917 called for tank assaults to be mounted in early morning and in fog, if possible. Attacks were to be continuous with the tanks to be capable of moving at 2 mph for up to six hours to be followed by carriers transporting fuel and supplies. Estienne also stressed the need for thorough coordination beforehand with infantry, artillery, and aircraft. Infantry operating with the tanks were to be specially trained and would assist the tanks in crossing obstacles. Tanks were, however, free to move ahead of the infantry if unimpeded.

Although all 400 tanks ordered from the Schneider Works were to have been delivered by 25 November 1916, only eight were in army hands by that date. These were also of lighter construction, being built for training purposes. By mid-January 1917 there were only 32 training tanks. By April 1917, when their first tanks saw action, the French had 200 Schneiders ready, four times the number the British had used on the Somme. There were only 16 Chamonds available by that date, and the only ones to accompany the Schneiders were four unarmed vehicles used to carry supplies.

NIVELLE OFFENSIVE
At 6:00 a. m. on 16 April 1917, following a 14-day bombardment by 5,544 guns, the French army commander, General Robert Nivelle, launched a massive offensive against the Germans in the Champagne area of the Western Front. Touted by Nivelle as a means to break the deadlock on the Western Front, the offensive is known as the Second Battle of the Aisne and Third Battle of Champagne and also the Nivelle (or Spring) Offensive. Unfortunately the plans had been so widely discussed as to be an open secret; the Germans even captured a copy of the French operations order in a trench raid before the attack. The Germans had built a defense-in-depth and pulled back most of their front-line troops, which meant that the effect of the preliminary French bombardment was largely wasted against a lightly held German forward defensive zone. On 16 April General Joseph Alfred Micheler's 1.2 million-man Reserve Army Group attacked along a 40-mile section of front between Soissons and Reims, his objective the wooded ridges paralleling the front known as the Chemin des Dames. The brunt of the attack was borne by General Charles Mangin's Sixth Army and General Olivier Mazel's Fifth Army.

In the attack Mazel's Fifth Army deployed 128 Schneider tanks. Although they went into action the first day, they contributed little to the outcome of the battle, their crews finding it difficult to negotiate the rough terrain. St. Chamonds first saw action several weeks later at Laffaux Mill on 5 May 1917, but they experienced similar problems and indeed did not perform as well as the Schneiders. Many broke down during the long approach march and did not even make it to the battlefield. From the group of 16, only 12 made it to the line of departure. Several more were unable to advance, and three were destroyed in action.

The Schneiders and St. Chamonds had little impact on the outcome of the offensive, which the French called off on 9 May with only minimal gains. Far from winning the war, the Nivelle Offensive turned into near-disaster for the French army, as it led to widespread mutinies among the French front-line divisions. New French army commander, General Henri Philippe Pétain, charged with restoring the army, sought to improve conditions for the men and address their concerns. He told them he would not spend their lives needlessly and that he would remain on the defensive until such time as a true war-winning offensive was possible. "I am waiting for the Americans and the tanks," he declared.

Despite major battles along the Western Front in 1917 and attendant wastages of manpower and military equipment, the Western powers continued to build up their tank strength. Training and tactics also improved. By late November the French had some 500 Schneiders and St. Chamonds.