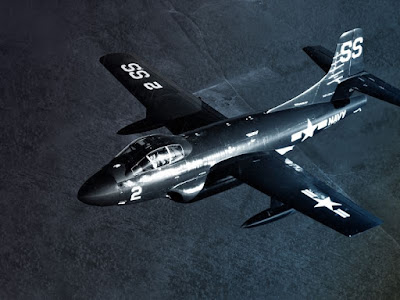 Why Douglas Skyknight crews weren’t afraid of the dark. 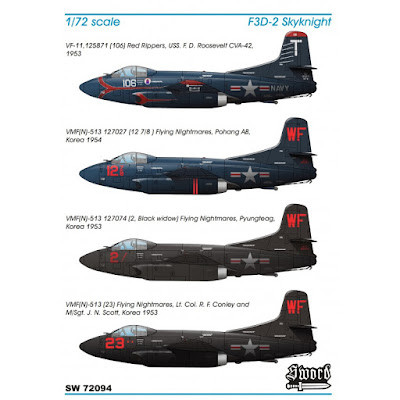 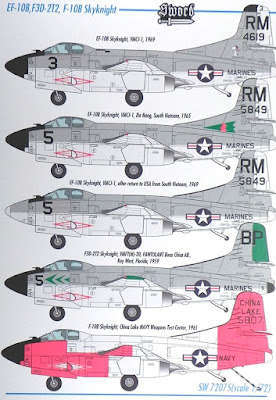 With a profile that would never be considered glamorous, the Douglas Skyknight was a conventional design delivering truly mediocre performance. Still, the Navy needed a sedan, not a sports car, and designer Ed Heinemann, who won fame for the World War II Douglas Dauntless and the 1953 Collier Trophy for the F4D Skyray, gave them what they wanted. Surprisingly, Skyknights would soldier on for two decades of service, easily outlasting speedier, more nimble contemporaries.

Conceived as the Navy’s first purpose-built night fighter, the Douglas F3D was built big to accommodate a complicated radar system along with a powerful battery of four 20-mm cannon. There were three radars: search, fire control, and a novel tail-mounted unit warning of threats approaching from behind. Pilots took off in darkness, flew by instruments, and trusted the radar operators sitting next to them to guide them to enemy aircraft that blipped across scopes mounted on the radar console.


The major production version of the Skyknight was the F3D-2. Preliminary specifications for the F3D-2 were released by the Navy on May 23, 1949, and the letter of intent was issued in October of 1949. The F3D-2 had improved cockpit air conditioning, a thicker armored windshield, revised electronic equipment, as well as improved versions of interception, tail warning, and gun targeting radars. In addition, the F3D-2 had a General Electric G-3 autopilot and was provided with wing spoilers for an improved rate of roll. According to original plans, it was to have been powered by two 4600 lb.s.t. Westinghouse J46-WE-3 turbojets housed in enlarged nacelles, which would have offered a substantially enhanced performance.

Unfortunately, the J46 experienced severe developmental difficulties and was still not available when the first F3D-2 was ready for its maiden flight in early 1951, and the first F3D-2 was powered instead by two 3400 lb.s.t. J34-WE-36s. It took off on its maiden flight on February 14, 1951. In the event, the J46 never did overcome its teething troubles and production of this engine was cancelled, forcing all production F3D-2s to settle for the less-powerful J34-WE-36s. However, all F3D-2s retained the larger engine nacelles that had been designed for the J46.

VMF(N)-542 deployed to Korea with its F3D-2s in the spring of 1952. They were soon transferred to VMF(N)-513 based at Kunsan (K-8). Their primary mission was to fly night escort missions for Air Force B-29 bombers. On November 2, 1952, pilot Maj William Stratton and radar operator Hans Hoagland shot down a North Korean Yak-15, the first jet-vs-jet night kill.

On the night of 2:3 November 1952, a Sky Knight piloted by Marine Major William Stratton, accompanied by radar operator Master Sergeant Hans Hoagland, shot down what they reported from the exhaust pattern to be a Yak-15 fighter, and claimed a confirmed kill since the Sky knight flew through debris, narrowly evading damage. Russian records indicate the target was actually a MiG-15
-- the Yak-15 was really not suited for operational use, and wasn't used in combat in Korea or anywhere else -- and though the Sky knight set the MiG on fire, the pilot managed to extinguish the flames and get back to base. The MiG was fully operational in a few days, a tribute to its rugged construction.

However, five days later, on the night of 7:8 November, another F-3D Sky knight under the command of Marine Captain Oliver R. Davis with radar operator Warrant Officer D. F. "Ding" Fessler shot down a MiG-15. Russian sources do confirm this kill and that the pilot, a Lieutenant Kovalyov, ejected safely.

On 10 December 1952, a Sky knight piloted by Marine Lieutenant Joseph Corvi with radar operator Sergeant Dan George spotted a "bogey" on radar. They could not establish visual contact, but since no "friendlies" were supposed to be in the area, they fired on the target.

A kill was confirmed when Sergeant George spotted a wing tumbling past them. This was one of the first times when an aircraft destroyed an enemy that the crew could not see. It turned out to be one of the little Po-2 biplanes used by the North Koreans to harass UN forces at night.

The Po-2 was a difficult target, since it flew low and slow, it was small and agile, and its mostly wooden construction did not show up well on radar.

The Marine Sky Knights claimed a total of at least six kills and no B-29s under their escort were lost to enemy fighters. Two Skyknights were lost in combat for unknown reasons.

In subsequent night actions, F3D-2s accounted for another Yak-15 and six MiG-15s, with no losses to themselves, which gave the Skyknight an overall 8-0 superiority in Korea. In addition, no Air Force B-29 was ever lost on a F3D-2-escorted mission. VMF(N)-513 crews also flew some night strike and interdiction sorties. Two Skyknights were lost in combat to unknown causes.