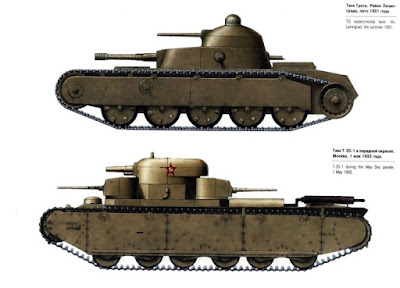 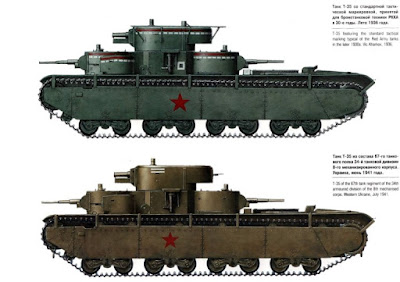 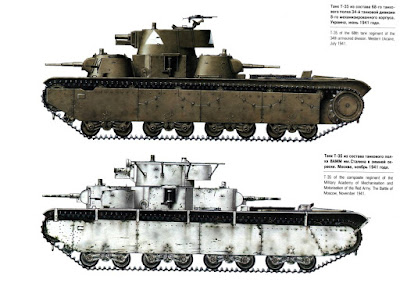 Design and Development
The T-35 tank was commissioned after the cancellation of the TG tank project in 1931. The TG tank was a joint German-Soviet design for a heavy tank, with two turret layers bristling with armaments. The RKKA (Workers’ and Peasants’ Red Army) dismissed the TG project, and the designer, the German-born Ernst Grotte, moved back to Germany to continue his career in tank building. The RKKA concluded that the vehicle had too many flaws, and pursued a new, multi-turret tank which would eventually become the T-35. Some will claim that the T-35 was inspired by the A1E1 Independent tank, but Soviet-era sources claim the A1E1 had no influence on the design, despite Soviet knowledge of the vehicle.

A new heavy tank prototype was designed in early 1932, designated ‘T-35-1’. It was produced at the Kharkiv Locomotive Factory (KhPZ). This first prototype had six pairs of road wheels arranged with two pairs of road wheels per bogie. Each bogie was fitted with coiled spring suspension comprised of two pairs of springs. All of the sub-turrets of the prototype were of the same design and shape—two had 37-mm PS-2 guns, and the other two had DT-29 machine guns. When facing forward and aft of the tank, the 37-mm turrets were on the right, while the machine gun turrets were on the left. The main turret was fitted with a 76.2-mm PS-3 gun. It was welded with a distinctive curved roof and rested on an armoured pedestal.

The tank had two armoured skirts on either side to protect the suspension; however, rather foolishly, the skirts of the first prototype had no access ports, and there was no way to access the suspension without pulling the skirts apart. The tank was powered by the M-17L aircraft engine, with the drive wheel at the rear. The tracks ran over the top of six return rollers that were almost two metres above the ground. This prototype was evaluated in mid-1932 before a second prototype was ordered.
The second prototype was outwardly similar, with the exception of the addition of access ports in the skirts. These were square shaped and gave all important access to the bogies for maintenance. In addition, the main turret relinquished the round roof. Accordingly, this prototype was called the ‘T-35-2’.

These T-35 prototypes were both evaluated but were not accepted for Red Army service. However, a radically changed design was accepted; it was called the T-35A. ‘T-35A’ is the western term for the tank. The German army technical records, which were issued to crews, gave letters to the designations of enemy tanks. Technically, all T-35s of all types and designs were simply T-35s in the USSR. However, for the purposes of this book, T-35s with cylindrical turrets will be called T-35A and conical turreted tanks will be called T-35.

The exhausts were moved from the fenders to the main body of the tank. This was done in order to protect the exhaust from damage. Finally, the main turret was now elliptical. It was identical to the main turret of the new T-28 tank. It featured a 76.2-mm KT-28 gun, an electrically powered turret traverse system, and complex electronics. In addition, a 71-KT-1 radio with distinctive ‘clothes line’ antenna was added.

The running gear consisted of four bogies. Each bogie was made up of four coiled spring suspension arms in two pairs, with two pairs of road wheels in between them. There was a drive wheel at the rear of the tank, and six return rollers, which were the same as the T-28’s road wheels. The track consisted of 135 links that were 526 mm in width.

In between the bogies were supporting brackets that attach to a skirt of metal that was on the exterior of the hull. These were made from five plates. Each plate was 10 mm thick and attached to the bogie and the return roller. This skirt was attached to a frame on the inside, and individual skirt parts could be removed. The skirt was attached to the fender, which ran from the front of the tank to the rear of the tank and was where all of the equipment for the tank was stowed.

The engine deck consisted of a central hatch to access the engine, with two air intakes for the radiators either side of the engine access hatch. Behind this was the exhaust, which was originally an exterior exhaust with an armoured cover for the front and sides. The rear of the tank sloped downwards, where a huge fan was situated. This fan had a cover, which was attached to the tank by hinges, and had vertical slats on it to allow for air flow. Below this were two rear transmission hatches.

The tank had five turrets in the forward two-thirds of the tank. These were arranged around a central turret pedestal. In front and behind were two turrets—a 45-mm turret with a MG turret to the 45-mm gun turrets on the left. The MG turrets were redesigned turrets from the T-28 tank and were equipped with a ball mounted DT-29 machine gun. This turret had a single hatch and a single vision port to the left.

The 45-mm gun turret was round, with a 45-mm K-20 gun facing forwards. The armour was 20 mm thick, and on the turret interior walls was 45-mm gun ammunition. Three racks were carried—one between the two vision ports on the right, one against the rear wall of the turret, and one on the right wall. The rear ammunition rack could be removed, exposing a door at the rear of the turret that allowed for gun removal and maintenance. A magazine rack was also carried in this turret with enough space for seven magazines of thirty rounds. This turret had a crew of two men—a gunner and a loader. The gunner was also equipped with a TP-1 periscope. The turret roof also had a smoke extractor and two hatches for the crew.

The main turret sat on a pedestal that elevated it above the 45-mm gun turrets. The main turret was elliptical in shape, with a slightly offset KT-28 76.2-mm gun. To the gun’s right was a cheek-mounted DT-29 machine gun in a ball mount. To the left of the gun was the turret traverse mechanism. The turret was connected to a rotating floor plate by five arms. On the rotating turret floor were two seats for the gunner and the loader, with stowage for six 76-mm rounds underneath each seat. Directly underneath the KT-28 gun was an ammunition rack for DT-29 machine gun ammunition. On the rear arm that connected the turret to the rotating turret floor was a folding seat for the commander.
The turret roof was equipped with two TP-1 periscopes for the gunner and the loader. The first tanks were issued with turrets with a single square turret hatch for the crew. Whereas, the later tanks were issued with a second hatch for the loader and a P-40 AA mount for the commander and gunner hatch. The turret roof had a pressed star between the two periscopes. The roof top also had small spring stoppers for the main hatches.

The tank had a crew of ten—three crew in the main turret (commander, gunner, and loader), two crew in the 45-mm gun turrets (gunner, loader), one crewman in each 45-mm gun turret, and the driver.
There was a production issue in 1936 that meant a batch of hulls were issued with 23-mm plates; however, it was not until 1938 that the thickness of the tanks armour was increased. The turret armour was increased to 25 mm, and the nose glacis armour was redesigned to be 80 mm thick.
Conical tanks also had a redesigned skirt with inspection ports. These ports were originally at a 40-degree angle; however, in the last four tanks, the skirts access ports were manufactured with square ports.

Changes to production
Production started in 1934, and by 1939, fifty-nine vehicles were produced, although most statistics include the two prototypes, increasing the number to sixty-one tanks.

Throughout production, improvements were constantly being made. For example, in 1934, the turret antenna was changed from having six to eight connecting arms. This was due to the antenna often breaking. The turret was also given an additional strip of armour which was used to hide and strengthen seams.

However, in 1936, the first major changes occurred. The main single turret hatch was replaced with two hatches and a P-40 anti-aircraft gun mount was added. At about this time, the exhaust was moved under the armour of the tank, and two exhaust pipes now protruded from the tank. Additionally, the thickness of the armour was increased on the machine gun turrets. The driver’s hatch was redesigned to reach the top of the glacis plate.

The next set of major changes in production occurred in 1938. The rear part of the side skirt was removed to prevent mud build up around the drive wheel, something that often caused major problems with the track during manoeuvres. The skirts were now fitted with inspection ports, which were triangular. Also, the smoke generators were made to be homogeneous with the sub turret structure. This was applied to chassis numbers 196-94 and 196-95. After twelve more tanks were produced to the previous specification, production modernised to the new standard.

In 1938, the tanks turrets were changed drastically to a more distinctive conical shape to improve the effective thickness of the armour and increase the longevity of the tank as its lifespan was already in question. The new hull, with inspection ports in the skirts, was re-equipped, previously being used on the experimental hulls 196-94 and 196-95. The conical turreted tanks were not issued clothes line antennae after 234-42, and a simple rod antenna was implemented. The final tanks produced were modified further; the smoke generator armour was angled, and the inspection ports were made square.

While the production runs differed, tanks were often taken back to factories and upgraded further. For example, a great majority of tanks had the old exhaust pipe replaced with the new style pipe, and some early tanks had their six antenna arms replaced with eight arms or removed all together, which was a very common occurrence.

Forty-eight of the tanks were later transferred to the 8th Mechanised Corps, two were sent to the Moscow Military District, and six were sent to the 2nd Saratov Tank School. In June 1941, on the eve of Operation Barbarossa, five tanks were going through capital repairs; they were being stripped of old or obsolete parts to be replaced with fresh or modern parts, back in Kharkiv. This is how the stage was set on the eve of what would become known as the Great Patriotic War.