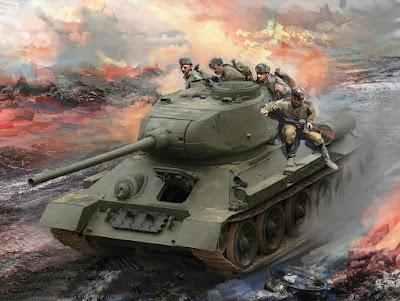 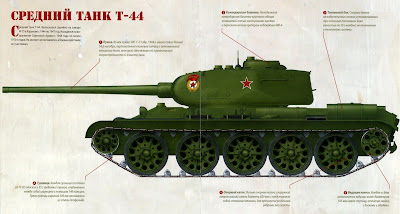 The T-44A was a medium tank produced in the USSR at the end of the WWII, conceived to be the successor to the T-34 offering improved cross-country performance and greater protection. The T-44 was equipped with the 85mm gun, same that the one that carried the T-34 later model, this made the production of the T-44 less important than ongoing with the T-34 mass production and although many tanks were available at the last months of the war it was not used in combat.

The development of the T-44 led to the T54/55 family tanks, the most widely produced in the world. The T-44M was one of the versions prior to this ubiquitous AFV, it was produced in 1961 and included new engine, gearbox, drive train, tracks, starfish roads, new R-113 and R-120 radio sets, a heater and infra-red night sight, TVN-2 night vision device for the driver, increased action range due to the new external fuel tanks, a mount for an AA machine gun at the turret, and other details that would remain in the T-54 family.

Although being obsolete and completely outclassed by the T-54/55 tanks, the T-44 remained in service until the end of the seventies decade, many of them went through different kind of upgrade programs and others converted into recovery vehicles, tractors, engineer tanks and even stationed pillboxes to defend the frontier at many points.

One of the designers' tasks was to lower the height of the T-34/85 that first went into service in the summer of 1944. Upgunning the T-34/76 had resulted in a much bigger turret, which increased the T-34's height from around 2.4m to over 2.7m. while the improvement from 76.2mm gun to 85mm gun was very welcome, it made the T-34/85's bulky turret a much better target. Similarly, the IS heavy tank was almost 3m high.

On the T-44 one way to achieve a lower silhouette was to eliminate the prominent collar at the turret base. The hull side armour, which on the T-34 was sloped, was vertical and thicker. This was to permit a wider turret ring because the turret's armour was more slanted than that on the T-34/85. Another way that the height was reduced was by installing the diesel engine transversely. Also the Christie spring suspension was replaced with a torsion-bar suspension. The result was that the T-44 had a height of just under 2.5m.

Improving on the T-34/85's main armament was unsuccessful. Attempts were made to upgun the T-44 with a 122mm tank gun but the turret was too small, although experiments with a 100mm gun were slightly more promising. However, only a few prototypes were ever built and the production T-44 retained the 85mm gun. The only way to get round this problem was to design a new tank with a larger turret.

While the T-44 was very similar to the T-34, the glacis plate at the front was much steeper which meant it had to be thicker. The driver was only provided with a very narrow vision slit in the glacis and his hatch, located next to the hull machine gun on the glacis on the T-34, was repositioned to the hull roof. The hull gunner was dispensed with in line with the existing trend with Soviet heavy tanks. Protection against infantry was provided by a Degtyarev 7.62mm machine gun mounted in a fixed position next to the driver, which was fired through an opening in the glacis plate. This was a feature later retained in the T-54.

The successful T-34 five road-wheel running gear was largely unchanged, although the T-44 had a wider gap between the first and second pairs of road wheels instead of the second and third as on the T-34. one of the drawbacks of the latter was that it employed the American Christie-style suspension. This meant that bulky springs took up a large amount of space inside the tank. efforts to remedy this with the T-34M in 1941 had to be abandoned because of the outbreak of war. The T-43 partially remedied this but was swiftly superseded by the need for a larger gun and the T-34/85 which used the existing T-34 hull.

The T-44 proved problematic especially where its weight was concerned. It was supposed to be the same as the T-34/85 at some 31.5 tons, but in light of the thicker armour and lengthening of the hull, it is hard to see what the lowering of the height achieved other than to reduce the tank's silhouette. It is suspected that the T-44 was heavier than its predecessor and suffered from problems with its running gear and transmission. 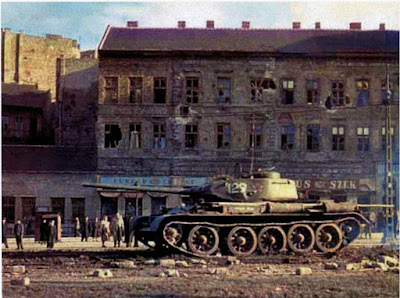 In the event only a few thousand T-44s were ever built at Kharkov and it did not see much, if any, combat at the end of the war. It was allegedly deployed briefly during the Hungarian uprising of 1956.
at October 21, 2018