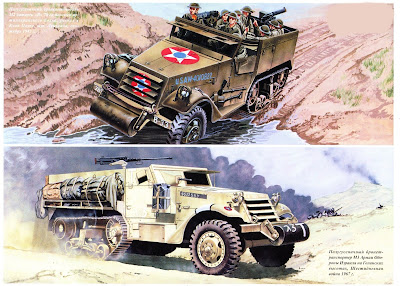 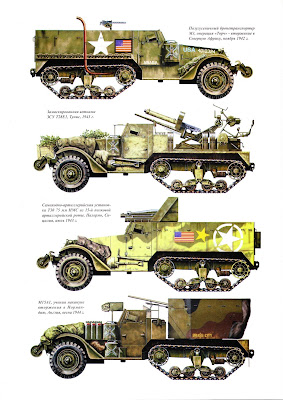 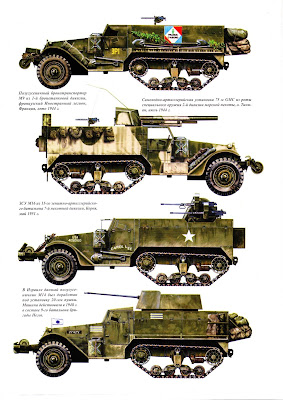 The American halftrack development history started during the 1920s, when some Citroen-Kégresse halftracks were purchased, and subsequent trials led to a long series of development models before the hull of the White Scout Car M2 was allied with a Kégresse halftrack suspension and the 'classic1 American halftrack emerged as the Half-Track Car M2 that went into production in early 1941, the first examples reaching the troops in May of that year.

Thereafter the halftracks rolled off the assembly lines in their thousands. It would be easy to say that most of them were personnel carriers, but also included in the totals were mortar carriers, multiple gun motor carriages, gun motor carriages, trucks and a vast array of experimental types of all kinds. All manner of weapons were hung upon the basic halftrack chassis at one time or another but among those that were used in action were 57-mm (2.244-m) anti-tank guns, 75-mm (2,95- in) field guns and even 105-mm (4.13- m) howitzers. Anti-aircraft versions carried varying multiples of 12.7-mm (0.5-in) machine-guns, 20-mm cannon and 40-mm Bofors guns. Combat engineer equipment was another widely carried load (each model had racks along the sides to carry anti-tank mines).

It was the personnel carriers that were the most widely used, and in several versions. The early M2 was supplemented by the later Half-Track Personnel Carrier M3 which could also be used as a communications vehicle, an artillery tow vehicle, and as an armoured ambulance. The even later Half-Track Personnel Carrier MS differed in production methods and there was also a Half-Track Car M9. Seating varied between models from 10 to 13, and there were various dispositions of machine-gun mountings. The usual arrangement was a 12.7-mm Browning at the front on a large ring mounting and a 7.62-mm (0.3-in) Browning on a pintle at the rear. To this could be added the weapons of the carried troops, and the picture of halftracks firing away as they went into action is complete. It now seems impossible to visualize troops operating in Europe in 1944 and 1945 without halftracks somewhere in the picture, for the Americans issued halftracks of all kinds to their Allies, including the British who started to use American halftracks even before the fighting in North Africa ended, Production of halftracks was some 41,170 units.

After the war the halftrack story did not end, and even now is still not over for the halftrack in several forms is still a front-line vehicle for the Israel Defence Forces. Re-engined and refurbished for the umpteenth time, halftracks continue to be used by the mechanized formations of the Israeli army although most have now been relegated to the Reserve forces. Other armed forces still use halftracks, but now the most common use is as a recovery vehicle, a role that commenced during World War II with the Allied forces. It should not be forgotten that during World War II one of the halftrack user nations was the Soviet Union, for large numbers were shipped there from 1942 onwards.

In America, 43,000 Half-Tracks were produced by three primary manufacturers; the largest being the White Motor Company, the original designer, with a total of 15,414 accepted by the War Department. The other manufactures, Auto Car built 12,168 and Diamond T a further 12,421. These designs were produced under license in Canada, and were widely supplied under the Lend Lease program, with 5,000 supplied to the USSR alone.

The fourth manufacturer of American-made half-tracks was the International Motor Truck Corporation division of International Harvester. IH built approximately 12,853 half-tracks, which were shipped to Europe for use by British and French Allied troops. In 1942, they produced 152 M5 units and 5 M14 units at the Springfield Works; in 1943 they produced 2,026 M9 units, 1,407 M9A1 units, 4,473 M5 units, 1,600 M14 units, and 400 M17 units, all at the Springfield Works; in 1944 they produced 1,100 M5A1 units and 1,100 M17 units also at the Springfield Works; and in 1945 they built 589 M5A1 and 1 M5A3 units at Springfield Works. The IHC half-tracks differed visibly from the White, Diamond T, and AutoCar units in several ways. The IHC units had flat front fenders instead of fenders with compound curves; used the International Red Diamond 450 engines instead of the Hercules 160AX engines used by the other manufacturers; used IHC Model 1856 4-speed transmissions instead of the Spicer 4-speed transmissions used by the other manufacturers; had IHC Model FOK-1370 front drive axles instead of the Timken front axles used by their competitors; used IHC Model RHT-1590 axles in the read instead of the Timken axles used by their competitors; and were constructed with fully welded armor with rounded rear corners instead of the bolted armor with square corners used by the other three manufacturers.

In August of 1944, Allied forces liberated Paris, France. The first vehicle to enter the city was an M3 named "España Cañí" and driven by Spanish soldiers fighting under the French tricolor.  There followed several days of parades in late August. One parade of 25 August 1944 was down the Champs Elysees, with Charles deGaulle leading throngs of Parisians, and French soldiers driving IH half-tracks.
Variants
Armored personnel carriers
M3 - White Half-Track with White 386 cu in (6,330 cc) 160AX engine. Fitted with either an M32 anti-aircraft machine gun mount or a pedestal mount, both featuring an M2HB machine gun.
M3A1 - Any vehicle with the improved M49 machine gun ring mount over the right hand front seat. Between 1942 and 1943 all M3 Half-Tracks (standard and A1s) were continually upgraded. These improvements included a number of drive train, engine, and stowage improvements.
T29/M3A2 - Developed in 1943 to combine features such that existing M2 and M3 production could be switched to a common vehicle. Came at a time where the need for additional half-tracks turned out to be not as great as projected. The M3A2 was, therefore, not produced.
M3E2/M5 - International Harvester Half-Track, externally virtually identical to the M3, but with 450 cu in (7,400 cc). IHC RED-450-B engine, different drive train and fuel and electrical system. In fact, only the chassis, bogies, track, idler and drive sprockets, wheels, winches, transfer case, rollers, and machine gun mount were interchangeable. The M5 is heavier than the M3, due in part to heavier armor. Its rear body sides were in one piece, rather than bolted. The M5 was primarily for Lend-Lease, to Britain, Canada, France, and the Soviet Union.
M5A1 - As for the M3A1, an M5 with the M49 machine gun mount. It could fit one .50-caliber (12.7 mm) and two .30-caliber (30.06) machine guns. The IHC models had a slightly lower top speed (only 42 mph (68 km/h)) and lower range (125 mi (201 km)) as well.
T31/M5A2 - Similar in principle to the M3A2, a vehicle developed by the US Ordnance Department to combine the production of the M5 and M9 into a single vehicle. As with the M3A2, the projected need was never seen, and this version was never produced en masse.
M9 - Same as the M5, with stowage arranged as in the M2 halftrack, with access to radios from inside (as opposed to outside) and rear doors, plus pedestal MG mount.
M9A1 - Same as M9, with ring mount and three MG pintles.

M15 CGMC - T28E1 variant, equipped with an armored superstructure on the turreted mount to provide crew protection, and switched to M2HB machine guns.
M15A1 CGMC - Reorganization of the weapons, with the M2HB machine guns being fitted under the M1A2 37 mm autocannon instead of above as on the M15.
T10E1 - Variant to test the feasibility of mounting US made copies of the Hispano-Suiza HS.404 20 mm cannon on modified Maxson mounts. All were later rebuilt as M16s. The original T10 was based on the shorter M2 Half-Track Car chassis.
40 mm Experiments - Various attempts were made to mate the 40 mm Bofors L/50 gun to the M3 chassis. In all cases the weapon's recoil was too severe or the mounting too heavy, and the attempts were finally stopped with the adoption of the M19 MGMC on the M24 light tank chassis.
T54/E1 - Tested in 1942, the gun mount quickly proved to be unstable when fired, and the improved T54E1, which also added a circular armored shield and rear armor to the vehicle, could not fix the inherent problem. Prototype only.
T59 - A development of the T54/E1, fitted with outriggers to help stabilize the vehicle during sustained firing. Still proved to be too unstable for anti-aircraft use. Prototype only.
T59E1 - T59 fitted with the T17 fire control system. Prototype only.
T60/E1 - Similar to the T54 and the T59, but featured two .50 caliber M2 machine guns flanking the 40 mm cannon (the mounting's designation was T65). The T60E1 featured an armor configuration similar to that of the T54E1. Suffered from the same stability issues of previous attempts. Prototype only.
T68 - Perhaps the most radical of the experiments, the T68 featured two 40 mm cannons, one mounted on top of the other, plus a stabilizer on top of the two guns. The recoil force proved to be too much for the mount, and the idea was abandoned. Prototype only.
M15 "Special" - Field conversions by US Army depots in Australia of standard M3s, not M15s, fitted with turreted 40 mm Bofors L/50 guns. These were the only successful mating of this weapon to the M3 chassis, and were used more for direct fire support than for anti-aircraft purposes.

Email ThisBlogThis!Share to TwitterShare to FacebookShare to Pinterest
Labels: halftrack