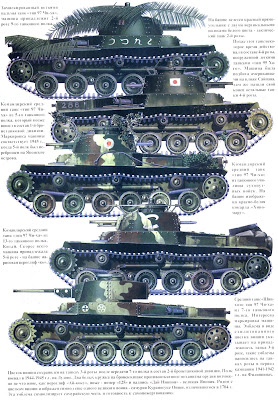 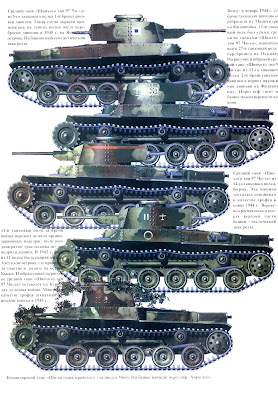 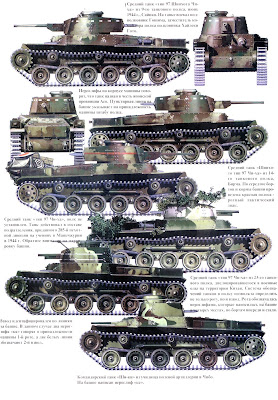 With the resumption of fighting with China in 1937, the Japanese decided to put the larger Mitsubishi tank into production that same year as the Type 97 Chi-Ha medium. Essentially a scaled-up Type 95 light tank with a two-man right-offset turret, the Type 97 weighed some 33,100 pounds and ran on six double rubber-tired wheels per side. It saved weight by employing a bell-crank suspension with helical springs. There were no shock absorbers. Steering was by means of clutch and brake. The commander in the turret communicated internally by 12 pushbuttons connected to 12 light panels and a buzzer in the driver's compartment. The Chi-Ha had a 170-hp engine, a maximum speed of 24 mph, a crew of four, 8-25mm armor protection, and was armed with a 57mm main gun and two machine guns. Probably the best Japanese tank design of the period, it became the most widely used Japanese medium tank of World War II. It was also no match for comparable Allied tanks.

Fighting the heavier-gunned Soviet tanks in Mongolia in 1939 revealed to the Japanese the inadequacy of the 47mm gun on their basic Japanese medium tank, the Type 97 Chi-Ha. The Japanese then designed a new turret for the Type 97, replacing its low-velocity 6- pounder (57mm/2.24-inch) main gun with a longer, high-velocity 47mm (1.85-inch). Designated the Type 97 Shinhoto (new turret) Chi-Ha, the 35,400-pound tank had a number of desirable features, including monocoque construction, a diesel engine, and sloped armor, but it had only 25mm maximum armor and a 47mm main gun and was far outclassed by the more powerful U. S. M3s and M4s it encountered. The Type 97 was the most widely used Japanese medium tank of World War II. It also appeared in engineer and command tank versions.

The tank regiments into which the Japanese battle tanks were usually formed in general consisted of roughly equal numbers of light and medium types. The medium tanks were the heaviest category of Japanese armored vehicles. The principal model in service at the time of Pearl Harbor was the Type 97 or "Chi-Ha." It was a machine of about 15 tons, carrying a crew of four-- two each in the hull and the turret. This was the newest tank in the Japanese Army at the start of 1941, as well as the biggest. It mounted a short 57mm gun in the front of the turret, with the conventional Japanese arrangement of two 7.7mm machineguns, one in the front of the hull and the second in the rear of the turret. The 57mm cannon, with its low velocity, was of very little use in engaging enemy tanks. Its intended role was to deal with machinegun nests and other field fortifications that might impede the infantry, preferably by firing directly into them at short range. The Chi-Ha had armor up to an inch thick (25mm). It was not particularly fast, managing less than 24 mph even on roads. It did however possess a diesel engine which gave an adequate range.

Far from overpowering compared to many European tanks in 1941, the Chi-Ha had still not completely replaced the even more outdated old Type 89, Japan's first true medium tank. This was a vehicle of 13 tons, with the same armament scheme as the Chi-Ha (short 57mm gun and two machineguns, the latter mounted in a similar lay-out), and it also took a four-man crew. But it had even less protection than the Type 97 (17mm maximum armor), it was much slower (just over 15 mph tops), and it had a rather high silhouette for such a light vehicle, with a prominent sloping front hull (not entirely unreminiscent of the American Sherman). The Type 89 was so unwieldy that most of the ones remaining in service were fitted with a sort of tail to ground them and prevent them from tipping over backwards when traversing particularly uneven ground, or crossing shell holes and ditches. Still, this ancient tank remained in use not only in China (of course), but a fair number were also present supplementing the Chi-Ha in the medium tank units of Yamashita's 25th Army during its invasion of Malaya and Singapore, and a few also saw action in Burma before being either retired or relegated to the China theatre by mid-1942. In the Malayan campaign, at least, they shouldered the same combat burdens as the newer Chi-Ha's and the light Ha-Go's, and this was in many ways their last great hurrah in the war.

The Japanese Army also produced many permutations on its standard medium designs, particularly the omnipresent Chi-Ha. The most common of these adaptations in actual service was the "Shi-Ki" command tank. In this case the Chi-Ha was altered by fitting a dummy 57mm gun in the turret (leaving room inside the cramped interior that otherwise would have been taken up by the breech and mount), a loss of firepower that was compensated by replacing the hull machinegun with either a 57mm or 37mm cannon (examples of both existed). The Shi-Ki featured improved optics (which were not particularly good in the regular Japanese tanks) and communications-- it not only had a radio, it had a long-range radio, and in fact the Shi-Ki could be easily distinguished by the rail antenna around the top of the turret. Though by definition not produced in large quantities, individual examples of the Shi-Ki were nonetheless found in action in numerous places throughout the Pacific and Southeast Asia during the war, even in early 1942.

Other specialized variants of the Chi-Ha medium tank were less widely encountered. There was, for instance, the "Type G" mine-clearing tank, a regulation Chi-Ha fitted out as a flail, with a rotating drum whipping chains against the ground in front of the vehicle. The arrangement was familiar in British and American hands in Europe, but the Japanese example was something of a rare bird. There was also the "Se-Ri" recovery vehicle, a more extensively altered Chi-Ha that had the original turret replaced by a smaller type with sloping sides, mounting only a single machinegun (there was a second mg in the hull). Designed for recovering knocked-out or broken down tanks, its rather rudimentary gear for that purpose consisted of a small jib crane for hoisting and a winch for towing, both attached to the rear of the vehicle. The Se-Ri, too, was relatively seldom seen, although an occasional example did make it to the fighting zones. Japanese tank recovery efforts were not noteworthy during the war, and they appear to have developed this aspect of armored warfare much less extensively than the Germans, or even the western Allies, despite the paucity of resources that would seem to militate for getting the maximum use out of everything they had for as long as they could. However, Japanese maintenance work in general must not have been too bad, as evidenced by the number of antiquated Ha-Go's and Chi-Ha's that remained serviceable as late as 1944 or even 1945 (and also by the mileage they got from even more obsolescent vehicles in China).

Summary: Standard Japanese medium tank for most of World War II. Some of them saw service after World War II with the army of the People's Republic of China. The Type 97 later appeared as the Type 97 Shinhoto (new turret) Chi-Ha Medium with a high-velocity 47mm main gun.