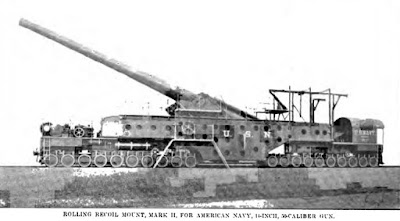 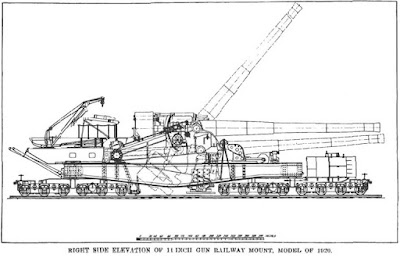 Railway Artillery forms another chapter in the history of our wartime Ordnance preparation. An inventory taken by the Ordnance Department as soon as war was declared against Germany showed some 464 big guns available for mobilization on the western front. These ranged in size from the 8-inch Rifle to the single 16-inch experimental Howitzer, which the Ordnance Department had produced, prior to 1917. In the number were included guns which could be spared from the Coast Defense as follows: 96 8-inch, 129 10-inch, 49 12-inch, and 150 12-inch Mortars. The Navy offered to turn over 12 of its seven-inch guns, and it in addition to six 12-inch, 50 caliber, rifles were commandeered from a private concern where they were under manufacture for the Chilean government.

Here was an assortment of guns that offered splendid opportunity for equipment in heavy artillery. The Ordnance Department determined it that railway Mounts offered the only means of providing the required it mobility for this heavy fixed emplacement material and at once undertook the production of such mounts.

The use of heavy Railway Artillery had been developed to a high degree during the war before our participation. It had come to be almost as varied in design as field artillery and each type of Mount had certain distinct tactical uses. Guns, howitzers and mortars were all adapted to Railway mounts. These mounts were of three general types, the First permitting a 360 degree gun traverse, or all around fire, the second providing limited traverse, and the third providing no lateral movement for the gun, the traverse aim being secured by means of shifting the position of the railway car on a curved track called epis.

The railway mounts with the 360-degree traverse was used for the 7-inch and 8-inch weapons and also the 12-inch Mortars. This gun carriage revolves on an axis and turns the gun with it. The recoil of this mount is absorbed by a recoil system similar to that used with field guns. Mounts permitting a limited traverse movement of the accord type were used for guns and howitzers of great range. It is necessary to shift the car upon which this carriage is mounted on a curved track, or epis, when wide traverse movement is required for aiming the gun. Only part of the recoil shock is absorbed in the recoil system of the carriage, much of it being transmitted to the Gun car itself, which necessitates the car been bolted to the track and braced from the ground. In the third mount, known as the Schneider type, also used for the heaviest guns, the gun trunnion and mount are fastened rigidly together. Thus with no traverse movements provided it is necessary to depend entirely upon the movement of the car on a curved track to secure traverse aim. The carriage, of course provides elevation for the gun. The entire recoil of this type is absorbed by the retrograde movement of the car along the track, the heaviest guns driving the car 20 or 30 feet backwards after firing.

The first railway mount project of the Ordnance Department was undertaken as a measure of defense against possible attempts by German submarines to raid our coast. The twelve 7-inch guns turned over by the Navy were mounted for this purpose. A special pedestal mount was designed, giving the gun at 360-degree traverse. This gun was mounted on one of the three standard types of Railway Artillery cars designed by the Ordnance Department for the 7-inch and 8-inch guns and the 12-inch Mortars, the three types having the same general features.

Taking the projects in the scale of guns sizes, for the 8-inch Coast Defense guns the first type of mount was adopted. Orders for 47 Gun cars and mounts were placed with three concerns, two of which had materially to expand their shop facilities before beginning work. The prevailing condition of congested railroads and depleted raw material markets proved a serious handicap to getting production under way. But by June 1918, the first 8-inch railway mount had passed a thoroughly satisfactory test at the Aberdeen Proving Ground. When the Armistice was signed 18 complete units had been turned out and the contracting plants had developed a capacity of 15 mounts per month. Three complete units had been shipped overseas. These units included Ammunition cars, transportation cars, tools, spare parts and all necessary equipment. It was necessary to equipped gun cars of these units would narrow gauge as well as standard gauge trucks so they could operate on the narrow gauge track used in the fighting zone in France.

An 8-inch gun of longer-range than the Coast Defense guns was subsequently designed with the railway mounts and an order placed for 25 for use abroad in 1920. When the Armistice was signed this undertaking was abandoned.

Railway mounts for the 10-inch Coast guns were divided between the Schneider and the Batignolles types. As a joint operation with the French government, we undertook to place 36 of these weapons on Schneider mounts, the forging and rough machining to be done in this country and the finishing in the French Shops. Contracts for our part of the project were distributed among three plants. General Pershing had called for the delivery of 36 sets of parts in France by March 2, 1919. When the Armistice was signed 8 complete sets had been produced, and there is little doubt that had the war continued the 36 sets would have been delivered by the dates specified.

The Batignolles mount project for the 10-inch Coast gun was placed with the Marion Steam Shovel Company, which undertook to produce 18 of these mounts. Difficulty in translating the French drawings and in securing the necessary raw materials and Machine equipment entailed serious delays in this project and the Armistice was signed before any of the mounts were produced and the entire project was canceled shortly after the Armistice.

The Marion Steam Shovel Company also undertook the manufacture of Batignolles mounts for 12 of the 12-inch Coast Defense guns. This contract was given preference over the 10-inch mounts and although none of the 12-inch mounts had been produced by November 11th, work had progressed so far that the Ordnance Department ordered all 12 completed. The first was delivered about April 1, 1919.

For the 12-inch Chilean naval guns the Ordnance Department re-designated the Schneider mount to facilitate manufacture in this country, as our manufacturers had experienced and lists trouble in producing the French designs because of their entire lack of conformity to American shop practice. It was decided to build three mounts for these six 12-inch guns, holding one gun in replacement reserved for each mount. Although the order for these mounts was not placed until the summer of 1918, all three had been completed and made ready for shipment to France by November, 1918 each with its entire equipment of supplies, spare parts, Ammunition cars etc.

Of the one hundred fifty 12-inch Mortars, which it was believed could be safely withdrawn from the Coast Defenses, contracts were let for the mounting of 96, General Pershing having asked that 40 be delivered in France in time for the contemplated 1919 campaign. Provided with railway mounts, it was seen that these Mortars would provide an excellent weapon for short, plunging fire.

The project of mounting these weapons proved one of the largest of the entire Artillery program. The Morgan Engineering Company of Alliance, Ohio, which undertook to build the cars and the barbette carriage mounts upon which the mortars were placed, had to erect a complete plant at a cost of $1,700,000 for the building alone. Specially designed machine tools necessary to carry out the work cost the government more than $1,800,000 additionally. Although construction of the plant was not begin until December, 1917, it was entirely completed by June of 1918 and the pilot mount had successfully passed firing test at Aberdeen by the end of August, an exceedingly noteworthy achievement in view of the weather conditions that prevailed that winter and the manifold industrial handicaps encountered. Every structural part for all of the 91 mounts ordered had been completed when the Armistice was signed. Despite the relaxation, which follows the Armistice, the company had delivered 45 complete units by April 7, 1919, whereas general Pershing had requested only 40 for the entire campaign of that year.

These mortars as mounted it were provided with a hydro pneumatic recuperateor of far greater size than any that had ever been produced in this country, and this feature added immensely to the project.
It was in May 1918 that the Navy offered to turn over to the Army certain 14-inch Naval Rifles then under construction and of which it was estimated 30 would be completed by March of 1919. For these Guns it was planned to use the redesigned Schneider railway mount that had been adopted for the 12-inch Chilean guns.

Accordingly and order for 16 of these mounts was placed with the Baldwin Locomotive Works, specifying deliveries to begin by February 1st, 1919, and to be completed by the following April. The signing of the Armistice, however led to the abandonment of the entire project. Five of these guns were mounted by the Navy itself on railway mounts of another design, to be manned by naval personnel in France. The Baldwin Locomotive Works constructed 11 of these mounts for the Navy Ordnance Bureau and six of them were subsequently turned over to the Army.

Finally, the Ordnance Department designed and built a railway mount for the huge 16-inch Howitzer, which had been bored and finished prior to 1917. The design for the mount was finished on February 10th, 1918, and in order to complete the project in the shortest possible time it was placed with three manufacturers, who did a remarkably fast job in turning it out.

Whereas all previous railway mounts for guns of this size had been designed to be braced from the track when the gun was set in position for firing, a great advantage was obtained by eliminating the necessity for this in the 16-inch Howitzer mount. No track preparation whatever was necessary to fire this weapon. The great firing load, estimated at 748,230 lbs. is safely transmitted to the trucks of the gun car through the intricate system of equalizer springs. The recoil action is absorbed chiefly by a hydraulic recoil cylinder with which the gun is equipped and the balance is taken up by the retrograde movement of the car on the track of 20 or 30 feet. This unit was demonstrated by exhaustive tests to rank with the highest types of Ordnance in use at that time. Orders for 61 additional 16-inch howitzers had been placed prior to the test of the pilot mounts but were canceled when the Armistice was signed.
at October 28, 2018