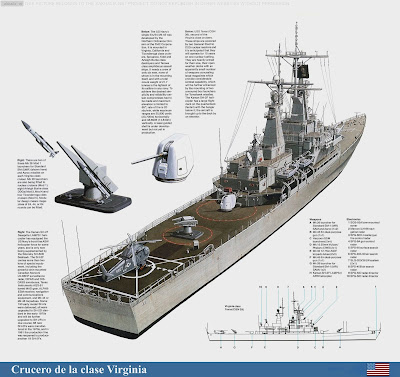 The need for more nuclear-powered surface warships to provide antiaircraft and ASW defense was clear, as only two of the frigates (DLGN), now known as cruiser (CGN), possessed this propulsion system. In order to take full advantage of the high endurance offered by the nuclear Enterprise, the United States embarked on the construction of new frigates with the same capability. The first of these was the two-ship California-class.

Completed in 1974 and 1975 and redesignated as cruisers, their hulls measured 596 feet by 61 feet and displaced 10,150 tons. Their turbine engines were powered by two nuclear reactors of the D2G type, which were originally designed for destroyers and manufactured by the General Electric Corporation. Each reactor compartment was cylindrical, measured 37 feet high and 31 feet wide, and weighed 1,400 tons. The top speed produced by this propulsion system was 30 knots. These ships represented a step forward in missile technology. In place of the older SAM batteries, these vessels mounted two twin-armed Standard SAM launchers with magazines that could each hold 40 missiles. One each was located fore and aft.

The Standard missile represented a great improvement over those of the "3Ts" and is still in use in the United States Navy. Research and development for this weapon began in 1963 with the object of replacing Terrier and Tartar. First entering service in 1967 and designated RIM-66, this missile measures 15 feet, 6 inches, weighs 1,370 pounds, and possesses a maximum range of 104 miles thanks to its jet engine that can produce a Mach 3.5 velocity. The guidance system is greatly enhanced and allows for better accuracy through faster course corrections in flight. As a result, it can be used against aircraft and helicopters and for defense versus cruise missiles. This latter capability was important at the time given the inability of the "3T" missile systems to effectively combat Soviet antiship missiles. Finally, the Standard missile can also be used against surface targets, which represented the first move toward addressing the paucity of offensive power against enemy vessels that plagued the first U. S. missile cruisers.

In addition to this system and its enhanced fire control and radar array, the California-class also shipped an ASROC launcher and four Mark 32 torpedo launchers for ASW along with sonar. These vessels were also armed with two 5-inch guns in single mounts for the purpose of close-range defense. Unlike guns of the past, these were fully automated, computer-controlled weapons. Each gun possessed a magazine that held 475-500 rounds and could fire 16-20 per minute to a maximum range of almost 15 miles. This gun remains in use in the United States Navy. Four similar frigates of the Virginia-class were completed between 1976 and 1980, redesignated as cruisers at the same time as the California-class. The hull of Virginia measured 585 feet by 63 feet and displaced 11,000 tons. Its propulsion system and armament were identical to the previous vessels. The chief difference was the absence of an ASROC launcher in favor of a Standard missile system that could fire SAMs and ASROC missiles.

Harpoon missile: The naval version of this missile was first deployed in the early 1980s and resembles the French Exocet antiship missile. It is still a primary weapon of the United States Navy and was first deployed on the Virginia-class cruisers when they were retrofitted. A Harpoon weighs 1,385 pounds and is 15 feet long. It carries a 488-pound warhead at a speed approaching Mach 1 and has a maximum range of almost 70 miles. Like Exocet, its guidance system allows it to home in on a target while skimming the ocean surface before striking the hull of an enemy vessel and exploding within.

Virginia ships were refitted to carry two quadruple-mount Mark 143 Tomahawk missile launchers in the stern The Tomahawk launchers carry eight Tomahawk (BGM-109) antiship and/or land-attack missiles More capable than the Harpoon missile, which has a range of 80 nautical miles (92 miles) and carries a warhead containing 510 pounds of high explosive, Tomahawks have a range of more than 250 nautical miles (287.5 miles) and carry 1.000 pounds of high explosive. One SWG-2 Tomahawk fire control system is being installed along with the missiles, which are occupying space that was previously a hangar for the Kaman SH-2F Seasprite Light Airborne Multipurpose System I (LAMPS 1) helicopter. Problems with the hangar elevator mechanism and trouble with maintaining a watertight seal on the elevator doors led to the decision to remove the hangar and replace it with the Tomahawk launchers

Units: Virginia, Texas, Mississippi, Arkansas
Type and Significance: Together with the California-class, these vessels formed the bulk of the U. S. cruiser force until the early 1980s. They were also the last nuclear-powered missile cruisers built by the United States.
Dates of Construction: All units were laid down between 1972 and 1977, with construction ending on the class in late 1980.
Hull Dimensions: 585' x 63' x 21'
Displacement: 11,000 tons
Armor:   1 in (25 mm) Kevlar plastic armor installed around combat information center, magazines, and machinery spaces
Armament:
2 × Mk 26 missile launchers for 68 missiles
RIM-66 Standard Missiles (MR) / RUR-5 ASROC
8 × Tomahawk missile (from 2 armored-box launchers after a refitting)
8 × RGM-84 Harpoon (from two Mk-141 quad launchers)
4 × Mk 46 torpedoes (from fixed single tubes)
2 × Mk-45 5-inch/54 caliber rapid-fire gun
2 × 20 mm Phalanx CIWS (post-refit)
2 × 25 mm Mk 38 chain guns
6 × .50 cal (12.7 mm) M2 machine guns
Machinery: Turbines powered by two D2G nuclear reactors that delivered 60,000 horsepower.
Speed: 30 knots
Complement: 519
Summary: Like the California-class cruisers, these ships were first designated as frigates until 1975, when they were reclassed as cruisers. All four units were decommissioned between 1992 and 1997 and have been scrapped.
at October 22, 2018