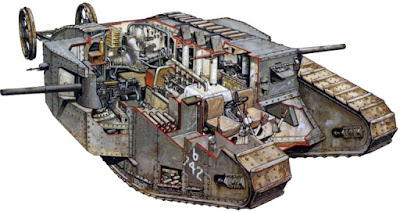 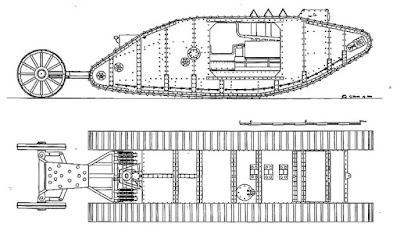 As Little Willie was making its appearance, Foster was completing work on a battlefield version. Because the chief requirements for the vehicle were that it be able to cross open ground as well as wide trenches, Tritton and Wilson came up with a lozenge-shaped design with a long, upward-sloping, tall hull and all-around tracks on either side that carried over its top. These maximized the vehicle's trench crossing ability. Because a turret would have made the machine too high, its designers mounted the guns in sponsons, one on either side of the hull. As it turned out, this was not a satisfactory arrangement. The resulting machine was first known as "Centipede," then "Big Willie," and finally "Mother."

Mother first moved under its own power on 12 January 1916. Thirty-two feet long and weighing some 69,400 pounds, it debuted on 29 January 1916 in Hatfield Park, within a mile of Lincoln Cathedral and under extremely tight security. A second demonstration on 2 February took place in front of British military and political leaders, including cabinet members. In Swinton's words,
it was a striking scene when the signal was given and a species of gigantic cubist steel slug slid out of its lair and proceeded to rear its grey hulk over the bright-yellow clay of the enemy parapet, before the assemblage of Cabinet Ministers and highly placed sailors and soldiers collected under the trees.

Although Mother met the expectations placed on it, even crossing a 9-foot trench with ease, Kitchener was unimpressed. He held to his already stated belief that the new weapon was little more than "a pretty mechanical toy." But Kitchener was in the minority. Most of those in attendance were quite persuaded as to the new weapon's potential. The enthusiasts included Chief of the Imperial General Staff Sir William Robertson, Prime Minister Balfour, and Lloyd George. Balfour was even given a ride. Churchill was certainly correct when he wrote in his memoirs that Mother was "the parent and in principle the prototype of all the heavy tanks that fought in the Great War."

Another trial was held on 8 February before King George V. Three days later the BEF in France requested the new weapon be sent there, and shortly thereafter the government ordered 100 units (later increased to 150), with production to be overseen by a new committee.

Unfortunately, the perceived need to rush the new weapon into production meant that design flaws remained largely uncorrected. For one thing Mother was woefully underpowered. The 28-ton vehicle was propelled by a 105-hp Daimler engine, the only one available. This translated into only 3.7 horsepower per 1 ton of weight. Half of Mother's eight-man crew was engaged simply in driving it: one as commander, another to change the main gear, and two "gearsmen," or "brakemen," who controlled the tracks; the remaining four men manned two 6-pounders (57mm/2.25-inch) and two machine guns. The new machine was also insufficiently armored. Its 10mm protection could not keep out German armor-piercing bullets at close range, and a direct hit by a high-explosive artillery round would most likely be fatal.

The production model, known as the Mark I, was almost identical to Mother. It weighed some 62,700 pounds and had a top speed of only 3.7 mph-over rough ground only half that-and it had a range of some 23 miles. Its principal parts were a simple, steel box-type armored hull, two continuous caterpillar tracks, a 105-hp Daimler gasoline engine, and armament of cannon and/or machine guns.

A two-wheeled trailing unit assisted with steering, but this was soon discarded as ineffective over rough ground and vulnerable to enemy fire. The clutch-and-brake method was then employed on the tracks but required four crewmen. And though it could span a 10-foot trench, the Mark I was only lightly armored in the mistaken belief that this would be sufficient to protect against rifle and machinegun fire. Armor varied in thickness from 6mm to 12mm.

Turning the tanks was a time-consuming, difficult process. One British participant in the Battle of Cambrai recalled that rounds

were striking the sides of the tank. Each of our six pounders required a gun layer and a gun loader, and while these four men blazed away, the rest of the perspiring crew kept the tank zig-zagging to upset the enemy's aim. . . . It required four of the crew to work the levers, and they took their orders by signals. First of all the tank had to stop. A knock on the right side would attract the attention of the right gearsmen. The driver would hold out a clenched fist, which was the signal to put the track into neutral. The gearsmen would repeat the signal to show it was done. The officer, who controlled two brake levers, would pull on the right one, which held the right track. The driver would accelerate and the tank would slew round slowly on the stationary right track while the left track went into motion. As soon as the tank had turned sufficiently, the procedure was reversed.
In between pulls on his brakes the rank commander fired the machine gun.

The Mark I came in two types. Half of them mounted two 6- pounder/.40-caliber naval guns in sponsons, or half-turrets, on the sides that provided a considerable arc of fire, with four machine guns; these were known as the "male" version. The "female" version mounted six machine guns and was intended to operate primarily against opposing infantry.

The name "tank," by which these armored fighting vehicles became universally known, was intended to disguise the contents of the large crates containing the vehicles when they were shipped to France. The curious would draw the conclusion that the crates held water tanks. The French made no such effort at name deception; they called their new weapon the char (chariot).

The Mark I was the mainstay of tank fighting in 1916 and early 1917, but it had notable defects. The stabilizer tail proved worthless; its fuel tanks were in a vulnerable position; the exhaust outlet on the top emitted telltale sparks and flame; and there was no way for a "ditched" tank to retrieve itself. Some of these deficiencies were addressed in the Marks II and III. These tanks appeared alongside the Mark I in early 1917.