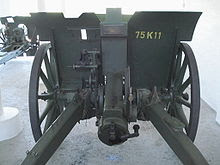 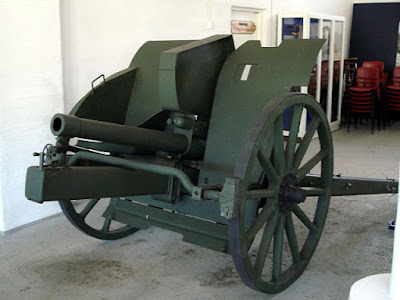 Italian Field Artillery
Although its Turin Arsenal manufactured a limited number of mountain guns, before World War I, Italy acquired its artillery from foreign sources, including Krupp of Germany, the Austro - Hungarian Skoda factory, and the French Deport firm. These included the Krupp-designed 75mm 75/27 Mo. 06, which also saw service in World War II, and the 75mm Gun Mo. 11 Deport. Designed by the prolific Colonel Albert Deport of France and adopted in 1912, the 75mm Gun Mo. 11 Deport introduced a dual recoil system as well as the split trail carriage. The latter innovation incorporated twin hinged trails that could be closed for limbering and then spread apart to stabilize the piece and allow greater recoil at higher elevation. The Mo. 11 was acquired by other powers as well as Italy, and the split trail carriage quickly became the standard for nearly all field pieces worldwide.

Italy also fielded the 75mm Gun Mo. 06/12 and a howitzer designated the Obice da 100/17 Mo. 14. An Austro-Hungarian design, the quick - firing caliber 100mm Mo. 14 howitzer was adopted in 1914, and numbers were also captured from the Central Powers at the end of World War I. The 100/17 saw extensive Italian service during World War II and was also used by Polish and Romanian forces.

Cannone da75/27 modello 11
Although the Cannone da75/27 modello 11 was designed by a Frenchman it was produced only in Italy and may thus qualify as an Italian weapon. The designer was named Deport, who conceived the idea of a recoil mechanism that could stay fixed in a horizontal plane while the barrel could be elevated to any angle desired. The advantages of this system are rather obscure, but the Italian army certainly took to the idea to the extent that they produced the modello 11 in large numbers.
The modello 11 was a relatively small field piece, as a result mainly of the fact that it was originally ordered for cavalry use, In time it was issued to other arms and became a standard field gun, Apart from the unusual (an uncopied) recoil system, the modello 11 also had one other novel feature for its day. This was split trail legs which gave the gun an unusually wide traverse by contemporary standards, and also enabled the barrel to be elevated to a maximum of 65* allowing the gun to be used in mountainous areas if required, In action the trails were spread and instead of the more usual tail spade the legs were held in place by stakes hammered through slots at the end of each. This certainly held the gun steady for firing, but there were two disadvantages to this system. One was that any large change of traverse could not be made until the stakes had been laboriously removed from the ground; the other was that on rocky or hard ground it took time to hammer in the stakes. For all these potential troubles the Italians used the stake securing method on many of their artillery designs, large and small.

The modello 11 was a handy little weapon with a good range; its 10240-m (11200-yard) capability was well above that of many of its contemporaries. However, for its size it was rather heavy, which was no doubt a factor in its change from the cavalry to the field artillery, In action it had a crew of at least four men although a full detachment was six, the extra two looking after the horses.

It is known that some of these guns were used by the Italian maritime artillery militia within the Italian coastal defence organization. The modello 11s appear to have been used as light mobile batteries that could be used for close-in beach defences of likely landing spots. Many of the modello 11s were still in use in this role after 1940, and many other modello 11s were in service with the field arti1lery. In fact so many were still on hand in 1943 that many came under German control, with the designation 7.5-cm Feldkanone 244(i), for use by the German occupation forces in Italy. By that time many modello 11s had been modified for powered traction by conversion of the old wooden spoked wheels to new steel-spoked wheels and revised shields; these modernized equipments used pneumatic tyres.