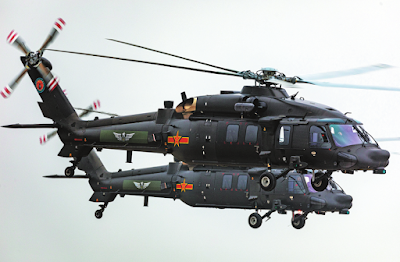 The Z-20 made its public debut during 1 October 2019 military parade in Beijing. 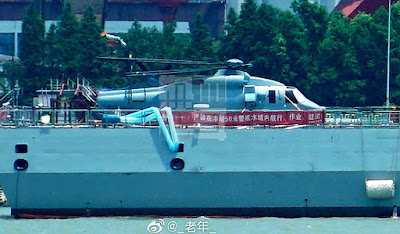 The naval variant of China’s Z-20 helicopter aboard a destroyer during the summer. A modified Z-20 with a foldaway tail rotor was first seen aboard the Type 055 guided-missile destroyer Nanchang in July. These are likely to become the navy’s Z-20F and carry out anti-submarine duties. 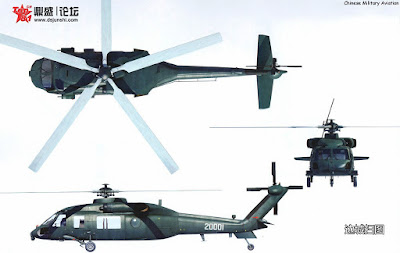 The 10t-class Harbin Z-20 medium helicopter achieved its maiden flight on 23 December 2013. The type was approaching low-rate initial production. Clearly mimicking the Black Hawk in appearance thanks to reverse engineering, the Z-20 is powered by twin WZ-10 turboshafts.

China would argue the helicopter is not a copy, since it has a five-bladed main rotor, fly- by-wire controls and a glass cockpit. The PLA needs the Z-20 for high-altitude operations in western China, plus the platform will likely enjoy multiple applications such as air mobility for army troops, SAR missions and multirole tasks for the PLA Navy.

China's domestically made utility helicopter, the Z-20, made its debut at the National Day parade on Tuesday, a move that confirmed its active service status within the Chinese military.

All equipment on display in the parade is domestically made and in service, Major General Cai Zhijun, deputy head of the office of the leading group for the military parade, said at a press conference in August.

This means that the Z-20 has already entered active service with the Chinese People's Liberation Army (PLA) following a lengthy trial phase.

China's Ministry of National Defense confirmed the development of the Z-20 in December 2013 after the chopper's alleged first test flight was spotted in northeastern China. Many pictures of the Z-20 have surfaced on the internet and Chinese aerospace magazines since then.

The Z-20 is a medium-lift utility helicopter that can adapt to different terrains and weather, and is expected to be used by the army and navy, military experts told the Global Times previously, noting that it can also operate on plateau areas like in Southwest China's Tibet Autonomous Region, where high elevations could cause problems, including a lack of oxygen.

As a utility helicopter it can be used in many types of missions, including personnel and cargo transport, search and rescue, reconnaissance and anti-submarine, experts said, noting that no other Chinese helicopter is as versatile as the Z-20.

Chinese navy tests new Z-20 helicopter for use on itswarships

Email ThisBlogThis!Share to TwitterShare to FacebookShare to Pinterest
Labels: helicopter