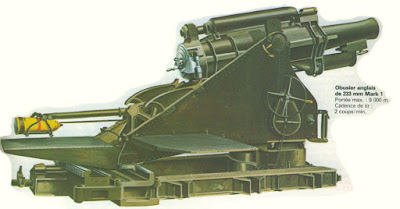 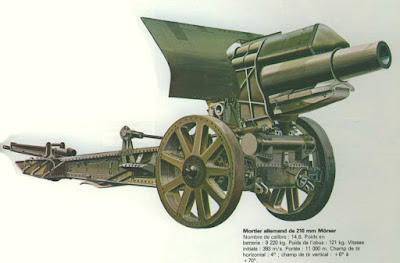 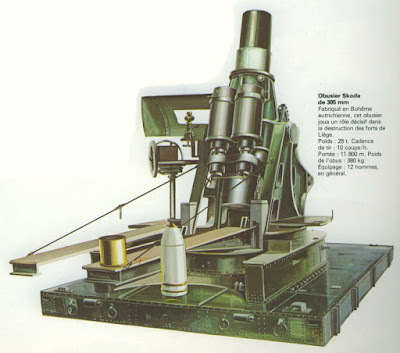 To the sentry standing his pre-dawn duty in the trenches of the Western Front, the sight of a jagged line of light on the opposite horizon cannot have been comforting, for behind such a line lay the fire of the largest concentration of artillery pieces in history. World War I was an artillery war and, while large numbers of field guns were involved in. all the major battles of that conflict. It was the heavy artillery that ultimately won or lost battles. It was only the heavy artillery that had the shell power to destroy the earth or concrete protection upon which each side. came to rely for survival in the front line, and it was only the heavy artillery that could smash a way through the lines of defences behind which each side sheltered. By 1914 most European powers had built up large gun parks that contained artillery of increasingly heavy calibres and power. These were necessary to demolish the rings of fortifications that all the major powers used to protect their territories against the intrusions of others, but once those fortresses had been bypassed by the events of the first year of the war the same heavy artillery was equally useful in the strange conditions of the Western Front, where trench lines imposed their own peculiar method of warfare.

The Great War was the heyday of heavy artillery. in the purely static conditions that existed along the Western Front the heavy guns and howitzers could be carefully emplaced with few thoughts of dramatic or rapid moves, and they could be fed with their heavy projectiles for as long as the required logistic machinery remained in being. They had plenty of targets as each side burrowed deep into the earth to survive the storm that daily flew over their heads. The only way to harm such burrows was by the use of heavy projectiles that could smash their way through such protection as there was, and these heavy projectiles could only be delivered by the heavy artillery.

ln an age in which mass-produced mechanical transport devices are common-place, it comes as something of a surprise to realize how scarce such devices were during the early days of this century. Before World War I a great deal of power was generated by the simple application of manual labour assisted at times by the power of the horse, and this has to be remembered in the context of heavy artillery. At that time mechanical traction and powered lifting devices were unusual. So when it came to moving and handling heavy artillery there was often little more than brute force available.

Throughout the centuries gunners have learned to handle even the heaviest of their charges using only what is to hand. This has always involved a complicated system of timbers, joists, pulleys, levers and hard work, and while this can on its own move even the heaviest field gun and its carriage, such methods can have only a limited utility in the movement of large-calibre weapons. Fortunately the monsters in service during World War I had generally been designed at a time when metallurgy and mechanics were beginning to reach an advanced state, so designers were often able to build into these weapons some form of handling system that required only a minimum of physical effort and also offered a greater degree of safety to all concerned. The various systems usually involved built-in rails and ln; inches that enabled a howitzer or gun barrel to be removed or withdrawn on to its transport carriage without the need for special jigs and overhead structures. Some heavy artillery had inbuilt cranes for the same purpose, while some designers simply decided that the best way to assemble and disassemble guns was by suppling a mobile crane that was issued as part of the weapon's standard equipment.

So by the time of World War I the emplacement of a heavy artillery piece was often not quite the problem it might have been, but usually there was still a great deal of work to be done. Pits had to be dug to accommodate the heavy firing platform needed by most weapons of the period, and in some cases earthboxes had to be filled to counteract the forces produced on firing. Heavy sub-assemblies still had to be manhandled on occasion, and this necessity often led to the allocation of only the largest men to heavy artillery units.

Putting the weapons [together or taking them apart was only one aspect of the labour involved in moving heavy artillery. Once the weapon had been broken down into a number of loads, each load had somehow to be pulled to where it was required. Before World War I this usually involved the horse or other draught animal, but the largest weapons required so many teams of horses that any real efficiency was impossible. Some of the less advanced nations had to rely on the horse, but the more advanced nations came to rely upon powered traction in the form of the internal combustion-engined tractor, the steam traction engine and even railways.

Traction engines were very often normal commercial models impressed into military service, and they rarely required any modifications for their new role. With the motor tractors things were different, however. The motor vehicle was still a relatively simple vehicle, and very often the power generated by the engines was relatively low. The only way to gain the power required tow heavy artillery was by the enlargement of engines to massive proportions.  This in turn led to large and heavy wheels to carry the engines and transmit power, with the result that the specialist artillery tractors of World War I resembled nothing more than huge bonnets carried on large wheels. ln such examples the drive appeared to be a mere appendage to the vehicle. Typical these monsters were the many designs produced in Austria and Germany, such as the Austro-Daimlers and their ilk.

But it should not be forgotten that all too often the motor tractor and traction engine could not be used for the simple reason that even under war production conditions there were rarely enough to meet all the demands made upon the numbers available. All too often the gunners had to rely on the horse for their traction purposes, and if horses were not available they had to call upon such beasts as draught oxen or even camels. The difficulties involved in using  huge teams of such animals to tow heavy and awkward artillery loads across the shattered terrain of World War I battlefields can barely be imagined, but for the gunners who had to carry out such tasks we can now only offer our admiration. 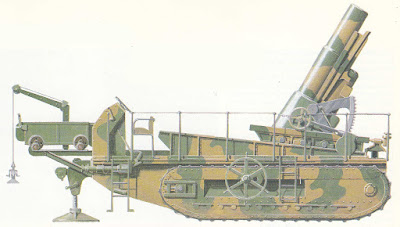 Based on a large chassis developed by Schneider, the M 280 sur chenilles carried a derivative of the mle I 4/I6 Schneider howitzer. Few of these 280-mm models were produced.

The Canon de 194 mle GPF used the same chassis as the 280-mm model. While elevation was limited, the vastly increased mobility was more than adequate compensation. The driver of the carriage sat at the front of the equipment, with the working area and rearward-facing ordnance behind him. The petrol engine was at the rear of the carriage, below the elevating gear.

The Canon de 194 mle GPF (Grand Puissance Filloux - High-Power Filloux) - was the first French tracked self-propelled gun (SPG). Designed at the end of World War I, it was a pioneering weapon with many modern features.

The vehicle was designed in Schneider's Le Creusot works. It was originally planned to arm it with a 155 mm gun but a weapon of 194 mm was eventually chosen. A few examples of this SPG were armed with a modified 280 mm siege mortar, this version was known as the M 280 sur chenilles (literally - "tracked M 280"). Both weapons used the same chassis and were powered by a 120 horsepower (89 kW) Panhard SUK4 M2 engine. Compared to its contemporary British SPG, the Gun Carrier Mark I, the Canon de 194 was much more advanced; it was driven by only one person, had hydraulic brakes and the gun had automatically adjusting recoil mechanisms and pneumatic recuperators.

These two weapons shared a common carriage driven by a petrol engine installed at the rear of the chassis. The driver sat at the extreme front with the barrel cradle almost immediately behind him. A small crane was provided to raise ammunition to the level of the crew platform behind the breech. The design had one drawback, the installation so arranged that ordnance elevation was somewhat limited (preventing the full range of the piece from being reached), but the mobility that the carriage provided more than made up for this. Later models were redesigmed to achieve increased elevations.

Not many of the 280-mm (11.02-in) models appear to have been made, Production was apparently concentrated on the 194-mm (7.64-in) model, but even so the main problem during the latter part of World War I was that there were never enough of them, Despite their bulk and weight they were able to cross terrain that no equivalent towed weapon could negotiate without difficulty, and the gun itself had a good range and a useful projectile weight.

After the Great War all M 280 models were converted to take the 194 mm gun. Around 50 were still in use at the outbreak of World War II, some were used against the invading German forces.

Surviving vehicles were pressed into Wehrmacht service as the 19.4cm Kanone 485 (f) auf Selbstfahrlafette. At least 3 of them were used by the Germans in Russia in about 1942, serving in the 84th Regiment of Heer Artillery.

For its day the French self-propelled carriage was a remarkable achievement. It now seems safe to say that it was the first true self-propelled artillery platform to be used operationally in any numbers, and it certainly had many features that were carried over to later designs. Apart from the caterpillar tracks these carriages had automatically-adjusting recoil mechanisms to suit all angles of elevation, hydraulic brakes and pneumatic recuperators.