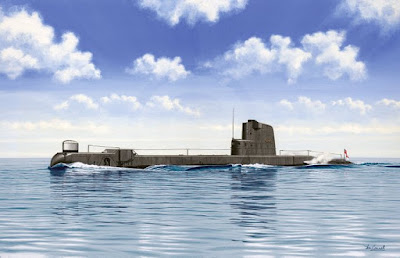 It was now two weeks since Taciturn had left Portsmouth, with the boat’s men restricted to just one wash a day for hands and face. There was only enough water for one full body wash a week per man. Everybody was beginning to stink and the rancid body odour was far from pleasant in such a confined space, although submariners cultivated a tolerance for it.

The boat’s interior was damp and chilly, with an increasing amount of condensation, caused by warm bodies and hot-running equipment in a cold hull. Some sailors guessed Taciturn was within the Arctic Circle and speculated the submarine sighted had been a Russian. The mysterious noise persisted, forcing the boat to surface and dive three times during the night of 18 September. Lieutenant Commander O’Connor considered abandoning the mission. There was no way they would remain safe in Soviet waters with such a giveaway. Hurley reflected in his diary: ‘it was pointless to go on as, if located, we would either be a grave embarrassment to HM Government or dead!’

That morning an aircraft contact, moving very fast, was picked up 200 miles away. It seemed from the electronic signature that it was a Soviet Badger bomber. The big jet eventually passed right overhead, travelling at 550 mph. Hurley noted: ‘It’s our first real contact with our “Comrades”.
At 17.30 on 19 September the boat surfaced; a potential source for the noise was found in the casing and thrown overboard.

Hurley by now had a boil and felt dreadful, with a heavy cold.

The Coxswain – a senior rating, third-most important man in the boat after the captain and First Lieutenant – told Hurley he would find a means of curing it. Had Taciturn possessed a naval doctor he might well have lanced the boil and drained the pus away. That was an extremely painful process and might have risked reinfection or the infection spreading, particularly with so little water available to wash. The Coxswain used a warm compress to bring pus to the surface and, once this had been done several times, the boil burst of its own accord.

As Taciturn got closer to Soviet waters O’Connor stepped up silent running and decided to make a broadcast, stressing the need for absolute stealth.

‘In many ways we have managed to cut down on noise but from now on we will have to be really quiet all the time. There must be no crashing around with stores, no shouting or hammering or dropping hatch covers.’

He gave them as much detail on the mission as he was allowed: ‘I am unable to say where we are. But we are in the operational area and for 48 hours, starting from yesterday afternoon, we are in a heavily patrolled U-boat area [Soviet submarine patrol zone]. During the subsequent 48 hours we will cross a line into an area heavily patrolled by both submarines and surface vessels. On the other side of that line is an area that will be most interesting and keep us very busy.’

They would be evading Russian attention while getting close enough to record intelligence. The boat stopped snorting at 02.30 with the intention of not doing so again for at least 24 hours to minimise potential exposure. Taciturn would reduce use of machinery to only the essentials, conserving battery power and keeping noise down.

There would be no hot meals during the day – just sandwiches for lunch (no banging around the galley with pots and pans). It also reduced the drain on battery power and ensured people could stay at their stations and not move about to go and get hot food.

Taciturn crept forward at minimum speed, reducing prop noise. Any sailors off watch were ordered into their bunks. Most lights were turned off, as were nearly all heaters. They must conserve the battery at all costs.

Hurley was soon afflicted with a rumbling stomach, scribbling down his thoughts as he lay in his bunk: ‘We bake our own bread, which soon goes. Tea, milk, sugar and water must be watched carefully and often dinner is very small as it’s cold, though normally supper is a good large meal. It’s not that we are starved so much as the long gaps between good meals (which are really good) and the fact that, if one is hungry, there is no bread to fill up on as is normal. But before we are through things will be a lot worse.’

Water consumption was still too high – some 300 gallons a day – but offset by a distiller creating fresh supplies.

The First Lieutenant warned if water usage continued to exceed 250 gallons daily he would shut off the supply completely. No mugs of tea, no washing at all or indeed any activity that required water, for at least 12 hours. The rations state was not good either – there was food for 19 days left, but the boat was expected to be out a further 29.

As if all that wasn’t trying enough, because Taciturn was not going to surface for some time, rubbish could not be ditched overboard. The stench of trash added to that of filthy bodies, made an almost unbearable combination. Hurley noted in his diary: ‘things are becoming tighter and the living harder’.

A sub-surface contact was reported during the Morning Watch, with a strong likelihood of a Russian submarine.

This was no surprise as they were well into the home waters of the Red Banner Northern Fleet.
Taciturn faced the dilemma of staying deep to remain undetected, or coming up to periscope depth and raising her Electronic Counter Measure (ECM) mast to spy on Russian activity. There were several air contacts and more signs of a Soviet submarine nearby.

Taciturn became a tomb – silent, cold, dark, with only the on-duty watch out of their bunks. The captain banned anything but necessary movement’.

During the evening of 22 September, as Taciturn cautiously poked her snort above the waves, telegraphists listened in on the wireless frequencies. They picked up a transmission from a Russian submarine, only 7,000 yards away (not even four miles).

Even when that potential threat melted away, Taciturn ceased snorting every hour so sonar operators could listen for any Russians nearby. It meant the batteries were not fully charged by dawn and it was dangerous to poke the snort mast above the surface during daylight. Tempers frayed, people flashing up at the slightest provocation. Hurley put it down to ‘boredom, lack of regular food, cold and headaches (which most people seem to have) and Rum, which is I think the main cause’. Yet, without the daily ration of rum to take the edge off things, life really would be beyond a joke.

There were indications of a determined effort to flush out Taciturn. Mysterious vibrations and bumps reverberated through the hull, which were possibly the Soviets chasing phantoms with depth charges. A message was passed along from the Control Room asking if anybody had heard an actual explosion in the water. In the early evening of 23 September, Taciturn detected a Soviet submarine very close. People moved as silently as possible to Listening Stations, using slow deliberate motions to avoid bashing into anything and creating noise. They taped the sound signature of the Russian boat. Over the next 63 minutes, the target did plenty to give itself away, using a snort mast and also active sonar pings.

Taciturn picked up various unidentified noises before again detecting the definitive sound of a submarine. The British boat closed down the distance to make further recordings but the contact faded.

A snowstorm offered an opportunity to snort under cover, reducing surface visibility by obscuring the tip of the mast. It didn’t last long. Likely-looking blizzards were spotted elsewhere through the periscope but nothing came Taciturn’s way, so she was unable to snort again. The air grew fouler and increasing efforts were made to reduce battery consumption.

Lieutenant Commander O’Connor’s orders stated that if Taciturn knew the Russians had spotted her she was to head home immediately.

A really determined search was now being made by the Soviets in the area where Taciturn had first detected a Russian submarine. There was a lot of air activity over that patch of sea. Up to three destroyers were carrying out search patterns. O’Connor concluded he had no choice but to withdraw.
Once inside a NATO exercise area Taciturn would be permitted to break radio silence, letting FOSM and the Admiralty know the patrol had been concluded. It was estimated they would reach the UK in around seven days. O’Connor took Taciturn as deep as he could and piled on knots to leave the Soviet patrol line far behind. The ECM operators picked up aircraft, two of which appeared to be running search patterns. At 20.00 on 27 September, Taciturn surfaced, remaining there for 24 hours, a strong swell making it difficult for her men to sleep as the boat rolled badly. Overnight Lt Cdr O’Connor was able to send his signal.

The boat would make the final part of her passage home on the surface, Taciturn proceeding down through the Minches, lids shut, snort mast bringing in the fresh air while getting rid of fumes and foul odours.

Hot meals were back on the agenda.

In his diary Hurley reflected on the peculiar and arduous existence of submariners: O‘no one really can know what life in a boat is like, not even the General Service [surface navy] ratings until they do a trip. Some of it is unbelievable: the condensation which is like rain at times, the fog, literally, [inside the boat] when we surface quickly, the varying pressure when snorting on one’s ear drums, the damp and cold and absolutely cramped style (35 bodies in a [bunk] space smaller than our kitchen at home), lack of water, fresh air, daylight, sleeping in one’s clothes for weeks. No one is a hero because of this and no one really grumbles, but anyone who says submariners have an easy life and don’t deserve the extra pay ought to see for themselves.’

On 3 October Taciturn came alongside at Faslane, the small, very basic submarine base at the Gareloch, in the mouth of the Clyde. Hurley was unimpressed, declaring it ‘just a small enclosed gravel area with little or no facilities and when we arrived no depot ship either’.

The day Taciturn reached Faslane, Russia launched Sputnik 1, the first man-made vehicle to be successfully sent into outer space. A fortnight later a US Navy submarine came into Faslane, dropping off a package, which was taken to the US Air Force airhead at Prestwick Airport. The American submariners whom Taciturn’s men socialised with claimed their package contained film of Sputnik being sent into the heavens. This was unlikely, as it was launched from Kazakhstan, a long way from any sea a Western submarine might penetrate.

The Russians were, however, conducting nuclear weapons tests on Novaya Zemlya. As with the British submarines, aside from the captain and a select few, nobody in the American boat knew exactly what they had been doing or precisely where. They did know that it was cold, damp and dangerous, and that the Soviets didn’t want them there.
at October 17, 2019