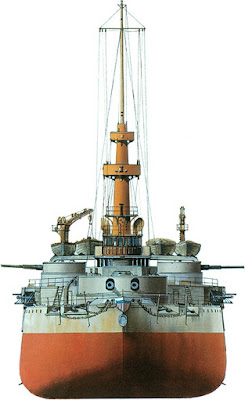 Indiana was classified as Battleship No. 1, and sister ships Massachusetts and Oregon were Battleships 2 and 3. From 1907 the designation was sometimes expressed as B-1, etc. The initials BB were used from 17 July 1920.

The heaviest guns are now on the centre-line, but the eight 203mm (8in) guns mounted at the corners of the central armoured area brought criticisms of ‘over-gunning’ on the relatively small US pre-Dreadnoughts.

A first-class battleship described by a British expert as ‘distinctly superior to any European vessels of the same displacement’, Indiana and its two sister ships were classified as ‘coastal battleships’ partly for domestic political reasons.

The influential American naval strategist Captain Alfred Thayer Mahan considered that defence of the American coastline needed a ‘forward strategy’ to intercept an enemy fleet out at sea. This required battleships, and Mahan’s view was endorsed by a policy committee in July 1889, which recommended construction of a battlefleet. Authorised by Congress in 1890 and recorded as BB-1 in the US Navy’s list of capital ships, Indiana was laid down at Cramp’s yard in Philadelphia on 7 May 1891, launched on 28 February 1893, and commissioned on 20 November 1895. Total cost was almost $6,000,000.

As with USS Maine, completion was delayed by the slow delivery of armour plate, and preliminary sea trials were conducted before the armour was applied or guns mounted. Protection was intended to equal the British Royal Sovereign class, but the availability of Harvey steel gave lighter weight but more effective protection to the belt and main turrets; other armour was nickel steel. With two tall funnels and a high single mast, Indiana presented quite a lofty appearance, accentuated by a low freeboard.

Firepower
Naval gunnery entered a phase of rapid development in the 1890s, with a strong emphasis on improving the precision and rapidity of fire. The US and British navies were leaders in these respects. Indiana was heavily armed for a ship of its size, and gun-positioning was a problem. Critics saw this as a consequence of trying to pack too many guns into too little space. If the 203mm (8in) guns were trained more than 30 degrees forward or aft of the beam, the effect of the blast made the sighting hoods of the 330mm (13in) turrets untenable. The blast of the 203mm (8in) guns also made use of the 152mm (6in) guns impossible, and some of the 152mm (6in) gun-ports had to be closed up (in 1911 the 152mm (6in) guns were replaced by 76mm (3in) guns). In addition, a wide range of ammunition had to be carried. Though American ships were perhaps extreme examples, this was a feature of all pre-Dreadnoughts.

Guns
Heavily-gunned for their size, Indiana and its class-mates Oregon and Massachusetts carried 330mm (13in), 203mm (8in) and 152mm (6in) guns. The main guns were mounted in pill-box turrets which were not counterbalanced, making the ship tilt when the guns were trained abeam; and making the turrets themselves unstable. The problem was accentuated by the ship’s tendency to roll, which was partially cured by the fitting of bilge keels, but the low freeboard meant that even in a moderate sea the decks were awash, especially when travelling at speed. The 203mm (8in) semi-heavy guns were intended to pierce the thickened side armour which had been introduced to counter the effect of explosive shells from quick-firing 152mm (6in) guns, but their weight and the blast effect of their discharge on a relatively short hull reduced their effectiveness in use.

Specification
Indiana’s original specification turned out to be unrealistic in certain ways, once the ship was in service. Coal capacity had been reckoned at 363 tonnes (400 tons) whereas in normal service it carried more like 1451 tonnes (1600 tons). The design had provided for a draught of 7.3m (24ft), but on completion the weight of equipment had increased it to 7.8m (25ft 8in); and fully loaded with coal, stores and ammunition the draught was 8.2m (27ft), which put the whole armoured belt below the waterline, as well as lowering the freeboard to make it a very ‘wet’ ship. Later battleship designs would be required to allow for a normal load of at least two-thirds of maximum capacity.
Indiana was deployed to the North Atlantic Squadron based at Key West and saw action in the Spanish-American War of 1898, shelling shore targets and working on interception missions against Spanish movements. Oregon, built at San Francisco and intended for Pacific service, was sent round by Cape Horn to join the Atlantic fleet, then returned to the Pacific.

On 3 July Indiana was part of the US force which sank the Spanish destroyers Pluton and Furor, though engine problems prevented it from chasing two Spanish cruisers, which escaped.

Refit
From May 1900 to March 1901 it was on reserve, then used for training cruises. In a refit at New York Navy Yard between December 1903 and January 1906, eight new boilers replaced the original four, and the main turrets were balanced and had electric traversing gear installed. From 1905 to 1914 it was used as a training ship. During this period various further modernisations were made, including the fitting of the lattice ‘cage’ mainmast that would be typical of the US battleship. The 152mm (6in) guns were replaced by 76mm (3in), and radio communication was installed.

Indiana crossed the Atlantic to Queenstown (Cobh), Ireland in 1911. Again put on reserve at Philadelphia in 1914, when the USA entered World War I in 1917, it was recommissioned on 24 May and again used for gunnery training. Decommissioned in January 1919, the name was removed and as ‘Coast Battleship No. 1’ it was used as a target to assess the effect of aerial bombs on an armoured warship. Sunk in shallow water in 1920, the remains were retrieved and sold for scrap in 1924.