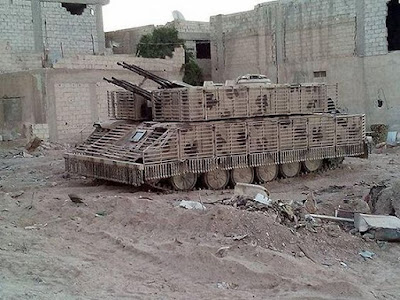 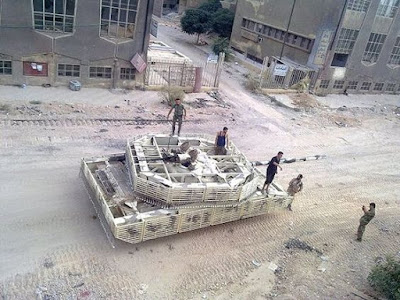 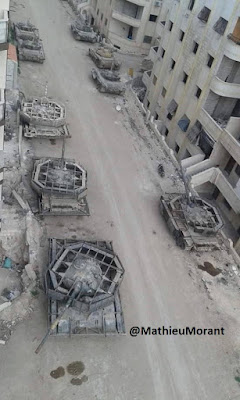 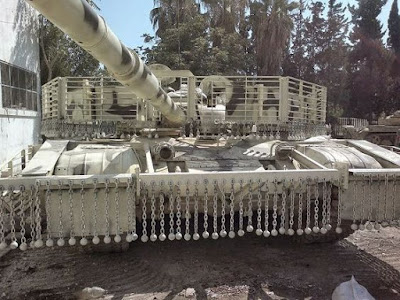 Syrian "Trophy System"[1] The Syrian armed forces have upgraded its combat vehicles with a local-made armor cage, to increase protection against anti-tank-missile and RPG. According some military sources, the combat vehicles have been upgraded to be protected during urban combat operations. The hull of the Syrian ZSU-23-4 self-propelled anti-aircraft gun is covered at the front, rear and on each side with an armor cage which seems to be designed and fitted locally. The lower part of this armor is fitted with closely spaced chains with ball ends.

[1] Reference to the same-named more sophisticated Israeli design in Israeli and US armies.
The Trophy system proved its high effectiveness in repelling single launches of anti-tank missiles and rocket grenades, including launches from different directions. However, the active protection system still can’t sustain fighting two or three anti-tank munitions launched at a minimum interval. This technology is used in Russia’s latest systems, for example, the upgraded Kornet system and single-use grenade launchers," the source said.

Specifically, these are the Russian-made Kornet-EM self-propelled anti-tank system and the RPG-30 single-use grenade launcher. The Kornet-EM is capable of firing two missiles in one beam with a minimum interval while the RPG-30 is furnished with a decoy rocket fired immediately before launching the main rocket. The Trophy active protection system still needs to work on effectively fighting anti-tank weapons based on this principle, the source noted. 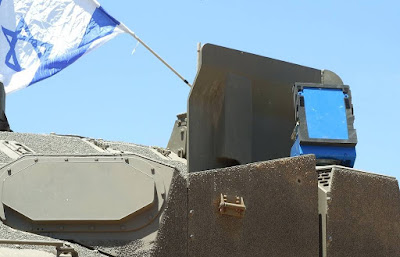 The Trophy active protection system is operational in the Israeli and US armies. According to the data of the Israeli defense technology company Rafael, the system has logged 500,000 hours of its continuous operation on various types of armor. This past March, a new contract to the tune of $79.6 million for the delivery of Trophy active protection systems for US M1A2 Abrams tanks was signed.
at October 17, 2019