THE KING OF BATTLE 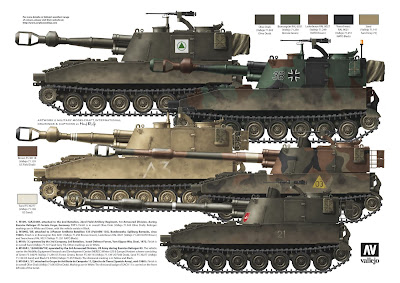 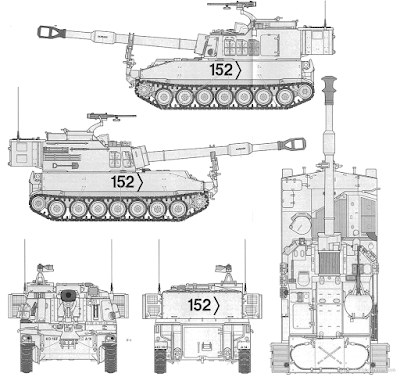 It has been a truism since at least the days of the Prussian king Frederick the Great that artillery is the `King of Battle'. Countless commanders from Napoleon to McArthur have credited the field artillery with both their victories and their survival. The importance of artillery is unquestioned still on the modern battlefield and no weapons system exemplifies that better than the US Army's 155mm M109 Self-Propelled Howitzer.

Development and Early History
Self-propelled artillery had played an important role in the Allied victory in World War II and vehicles such as the 105mm M7 Priest and 155m M12 and M40, all based on the Sherman chassis, had featured among the US forces that fought in north- western Europe during the last year of the War. The M40 served in the Korean War alongside the M37 and M41 (mounting the 105mm and 155mm howitzers respectively and based on the M24 Chaffee light tank chassis), but two replacement vehicles, based on the chassis of the M41 light tank, were in development by 1950.

These vehicles, the M52 (105mm) and M44 (155mm) entered service in 1952, but both proved unsatisfactory. Work was soon underway to develop a new generation of fully enclosed self-propelled howitzers that could meet the challenges of the envisaged nuclear battlefield of the Cold War. Moreover, the development of effective artillery-location radar during the 1950s made counter-battery fire a very real threat and necessitated a much enhanced level of crew protection than that offered by the open-topped M44 and M52.

The M109 had its baptism of fire in the Vietnam War. Initially no armoured or mechanised units were deployed in theatre and commanders relied either on heavy, long-range artillery (such as the 203mm M110) or lighter towed pieces. By 1966, however, the utility of the M109 (and M108) was clear. Deployed in forward firebases, defended with earth works and sandbags, the M109 proved itself well-suited to supporting the infantry. Its traversable turret and M2HB .50cal machine gun also made it capable of defending itself against infantry attacks. By 1969, however, the M109s were being withdrawn and two years later the last battery left Vietnam. The Vietnam War had confirmed the basic soundness of the M109 design, but it had also revealed shortcomings in the M126 howitzer and its ammunition when compared to state-of-the-art Soviet designs such as the M46 130mm gun.

Production Variants
The next four decades would witness a constant programme of measures to update and improve the performance of the M109, its gun and ammunition, alongside, ultimately futile, attempts to design and produce a successor vehicle. The need for greater range had long been apparent and in 1971 the M109A1 entered service. This was armed with the 39 calibre M185 gun which increased the maximum range to 18,100 metres. Other changes necessitated by the increase in firepower included a strengthening of the torsion bar suspension and a new travel lock fitted to the front of the vehicle.
The conversion of M109s to A1 standard continued until 1981, but in the meantime a `Mid-Life Improvement' program was instituted resulting in the M109A2 being adopted as for production in 1975. A new cannon mount, counterbalanced travel lock, and an improved engine accompanied a new turret bustle stowage arrangement which increased capacity from 28 to 26 rounds. Those M109A1s rebuilt to A2 standard were known as M109A3. The M109A2 eventually entered service in 1980 and 823 new vehicles were built between 1976 and 1985.

Throughout the 1970s and 80s much time, money and effort was spent in developing new forms of artillery round for the M109 series. These included rocket-assisted rounds, various types of sub-munitions and mines, and `special' rounds. This latter category included chemical weapons (which remained in the US arsenal until 1997) and the W48 nuclear warhead, a simple plutonium- based weapon which delivered a yield equivalent to 72 tons of TNT. Some 3,000 of these tactical nuclear weapons were deployed before they were withdrawn from frontline service with the end of the Cold War.

The 1980s saw further refinements to the M109 design. The M109A4 introduced enhanced NBC (Nuclear, Biological and Chemical) protection, but its deployment was limited to reserve and National Guard units. More significantly the Army launched the `Howitzer Improvement Plan' (HIP) to develop a new M109, alongside the abortive attempts to design and develop a completely new self-propelled howitzer.

The Paladin
The HIP resulted in the definitive model of the M109, the M109A6 Paladin. Beginning in 1985 various new guns were trialled and tested with the M109, eventually resulting in the adoption of the 39 calibre M284 cannon in a new mount. The M284 has a maximum range of 22,000 metres with normal munitions and 30,000 metres with rocket-assisted projectiles. Those M109A2/ A3s fitted with the new gun and mount were designated M109A5, but the Paladin proper had much more extensive modifications. The Paladin has a redesigned, larger turret incorporating new navigation systems, sensors and a digital communications system. The improvement in rates of fire and accuracy are startling: the Paladin can deploy from the march and be ready to fire within thirty seconds. The Paladin is deployed today in field artillery regiments as part of the Armoured Brigade Combat Team (ABCT). An ABCT currently fields sixteen M109A6s in two batteries and they are deployed in Poland and Germany as part of US Army Europe, as well as on the Korean Peninsula.

The ultimate version of the M109, the M109A7, entered low-level production in 2014. The M109A7 is the result of the Paladin Integrated Management Program. The new variant sports an entirely new chassis and drive train, engine, suspension and steering system, utilising components from the Bradley Fighting Vehicle family. It also has an enhanced 600-volt on- board power system designed to service the emerging technologies of the digital battlefield. It is heavier and faster than the M109A6 but can sustain a one round per minute rate of fire with deadly accuracy. The first vehicles were delivered in April 2015 and full production of 48 vehicles in the initial batch started this year.

The M109 in Action
The US Army's M109s have seen action in Vietnam, in the First Gulf War, in the former Yugoslavia, and, most recently, in Iraq. After its first taste of combat in Vietnam, the M109 has proved itself a highly effective weapons system. During the First Gulf War no fewer than 582 M109A2/A3s were deployed in 25 artillery battalions, firing some 43,000 rounds. These were mainly DPICM rounds, which unleased a rain of sub-munitions and steel fragments on the hapless Iraqi forces, but also included 100 Copperhead laser-guided munitions used to destroy enemy tanks.

In Operation Iraqi Freedom and in subsequent operations in that country the M109A6 cemented its reputation. The deployment of M109s for the 2003 invasion of Iraq was less than half of that to the Gulf twelve years earlier and as the United States fought the `War on Terror' the continued relevance of field artillery was called into question. Indeed, the proposed successor to the M109, the Crusader project, had been cancelled in May 2002 and the artillery was conspicuous by its absence from the operations in Afghanistan.

During Operation Iraqi Freedom the Iraqi artillery both outranged and outnumbered the divisional artillery deployed with 101st Airborne and 3rd Infantry Division, yet time and time again it proved itself essential in destroying enemy artillery and rocket systems. During sandstorms, the M109s and other guns provided artillery cover in the absence of air support. Essentially, during the invasion of Iraq the M109A6 excelled in the traditional role of artillery: providing effective and integrated close fire support to the infantry. The impact of the M109A6 was further enhanced by the presence of the M7 Bradley Fire Support Team Vehicle, which could keep up with the forward elements of the Combined Arms infantry and armour combat teams, providing precise coordinates within 50 metres at ranges up to 8,000 metres. The ability of the Paladin to keep up with the Bradleys and the Abrams, indeed the insistence of field commanders that they did so, and to provide both direct and indirect accurate fire support quickly was key to the remarkable success it enjoyed in the opening encounters of Operation Iraqi Freedom. The Paladin's success in suppressing the Iraqi artillery meant that during the invasion no American lives were lost to enemy artillery fire. A brigade commander from 3rd Infantry Division noted "the Iraqis had a lot of artillery, he used it extensively, but the combination of Paladin howitzers and the [Hughes AN/ TP]Q36 [weapon locating] radar was deadly. If he didn't move, he was dead. The 1-10 Field Artillery fired about 1,000 rounds during the battles around An Nasiriyah. The Iraqis [as a result] very seldom massed fires." (`U. S. Army Field Artillery Relevance on the Modern Battlefield', Marine Corps University, 2004)

Conclusion
Operation Iraqi Freedom and the subsequent actions by the US armed forces in that country confirmed the importance of the M109 to combined arms manoeuvre warfare. Alongside the M1 Abrams MBT and the Bradley Fighting Vehicle, the M109 is central to American war-fighting doctrine as the US Army reorients itself towards peer-to-peer or near-peer encounters. Put simply, the Paladin will be around for a few decades to come.
at October 17, 2019